Female
The Haunted Car, formally known as Becka Douglas, is the main antagonist of the twenty-first Goosebumps Series 2000 book of the same name.

14 year old Becka Douglas took her father's car out on a joyride, leading to her death. Mr. Douglas was so distraught that he was desperate to get rid of the car. Becka started haunting the car, and told her twin sister she plans to get revenge for dying so young.

When Mitchell Moinian's dad got the car, Becka started forcing Mitchell to get in so she can kill him. However, she accidentally saves his life by taking him on a ride while his house is catching fire. Because her mission is evil, she melted away.

The car apparently relies on Becka to run and doesn't require a car battery as when Becka melted away, the car stopped working entirely the next morning.

The Haunted Car appears in the Goosebumps movie as means of transportation for Slappy, driving on her own due to both her nature as a possessed automobile and because Slappy's legs are too short to reach the brakes, although she never speaks in the film.

After he released the car, he used her to rampage through Madison, Delaware. He also threw various Goosebumps manuscripts books out the driver's seat window after unlocking them. The Car later appears when Slappy prepares for the attack on Zach Cooper's school, using its afterburners to destroy the remaining manuscripts after the other Goosebumps monsters were released by the Lawn Gnomes.

Although the car's ultimate fate is left unknown at the end of the film, it is implied that she was sucked into the newly written Goosebumps book along with the other monsters (barring Brent Green).

As a ghost, Becka is a rotting corpse, with rotted skin. In life, she had wavy blond hair and dark catlike eyes, just like her sister Marissa.

In life, Becka seemed to be very reckless, due to taking the car on a joyride at a young age. As a ghost, she claims to be evil, and constantly tries to kill Mitchell so someone can join her in the afterlife forever. She's so dedicated to evil that saving Mitchell's life causes her to melt away forever.

The Haunted Car as seen on the original Goosebumps Series 2000 cover.

The Haunted Car as seen on the Classic Goosebumps cover. 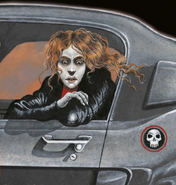 Becka's human form as depicted on the French cover of The Haunted Car.