The Haunted Car is the twenty-first book in the Goosebumps Series 2000 book series. It was first published in 1999.

The cover illustration shows The Haunted Car driving near the woods at night.

Mitchell Moinian is obsessed with cars, to the point where he has various models of them in his room. He's upset that his father refuses to replace his current broken down car. One day, they get into a car crash and survive, but dad has to buy a new car. Mitchell finds an ad for a new car in the newspaper, from someone on the other side of town. They meet with the seller, Mr. Douglas who is willing to sell it for a cheap price, and asks them to take it right away, almost like he really wants to get rid of it.

That night, Mitchell is so excited about their new car that he sneaks out to get in it, with a mysterious voice telling him to climb in. The car doors lock themselves, when a girl appears and helps him out. She introduces herself as Marissa Meddin, and says she just moved in. She soon vanishes. Mitchell finds himself having dreams about the car, including one where Marissa is driving a car that crashes into him.

The next day, Mitchell and his dad take a ride in the car. Mitchell looks in the glove compartment and finds a piece of paper reading "I'M EVIL." The following night, Mitchell's friends Allan and Steve drop by to look at the new car and convince him to sit in the car. It starts to feel freezing cold in the car, even though the AC is off. The doors lock but once again, Marissa appears to save them.

Mitchell's brother Todd hears about this and becomes convinced the car is haunted. Todd has been sure their house is haunted ever since they moved, and assumes ghosts are everywhere, so Mitchell is quick to write off his claims but is still curious. Later, Mitchell goes out to the car to see if anything is off and finds himself getting in, almost like some force is making him do it. Suddenly, the car starts getting out of the driveway on its own.

The car sends Mitchell on a wild joy ride, as he hears a girl's voice mocking him. After almost getting him killed by a train, she takes him home where his parents are outside and furious that he took the car. He tells them what happened but they don't believe him and promptly ground him. Todd assumes Marisa is the ghost, as she appears every time the ghost strikes. Mitchell finds this claim to be absurd and he calls the operator to find out where her family lives to prove to Todd she is real and alive, but he is told there is no Meddin family in town.

His parents and Todd leave to visit his cousin Ella, and leave him home so he can cool off, as his has been babbling about a ghost for the past few days. They're being driven there by someone, leaving him home alone with the haunted car. It doesn't take long for the ghostly force to compel him to sit in the girl, and soon a ghostly image of a girl appears next to him. She reveals she died in this car when she was fourteen, and now she wants to kill Mitchell so she can have someone to join her.

Mitchell demands she take him home and she agrees, because she can kill just as easily by crashing into the house. When they get there, they are shocked to see that that the house is on fire, because a wire accident caused by his father being a wannabe handyman. If Mitchell hadn't been forced into the joy-ride, he would have died in the fire. Realizing that she saved his life despite her mission being evil, the ghost melts away.

Mitchell gets out of the car to join his family, when Marissa appears. She explains that she is actually the ghosts twin sister, and her name was Becka. Last summer, she took the car on a joyride and died. This broke Mr. Douglas' heart so much that he was desperate to get rid of it. Marissa has been wanting to warm him, but she wasn't sure he'd believed him and when he said he knew the truth, she figured he didn't need the warning.

The Moinian family spends the night at a neighbor's house while Mitchell has lost his interest in cars and decides to go into model train building. The next day, Dad calls in a mechanic to figure out why the car doesn't seem to be starting anymore. The man checks the car and says there is no battery. Mitchell thinks his parents will finally believe him now. 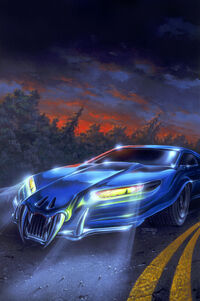 Retrieved from "https://goosebumps.fandom.com/wiki/The_Haunted_Car_(book)?oldid=128049"
Community content is available under CC-BY-SA unless otherwise noted.