"The Cuckoo Clock of Doom"

"The Girl Who Cried Monster" is the fourth episode of season one of the Goosebumps TV series. It premiered on November 11, 1995 on Fox during the Fox Kids block.

Lucy loves telling monster stories, but her family and friends are tired of her wild tales. So when Lucy sees a real monster—Mr. Mortman, the local librarian—no one will believe her. If she can just get proof that he is a monster maybe then they'll listen. But is it too late? Mom and dad have invited Mr. Mortman to dinner! This is sure to be one meal that'll be hard to swallow.

Lucy scares Randy saying that a monster bit off her toes.

Lucy tells her parents about Mr. Mortman, but they don’t believe her.

Mr. Mortman notices Lucy and chases her out of the library.

Lucy gets the photo developed, but Mr. Mortman is no longer there.

Mr. and Mrs. Dark invite Mr. Mortman over for dinner.

The Dark’s are revealed to be monsters.

Aaron shows up at the door wearing a monster mask. 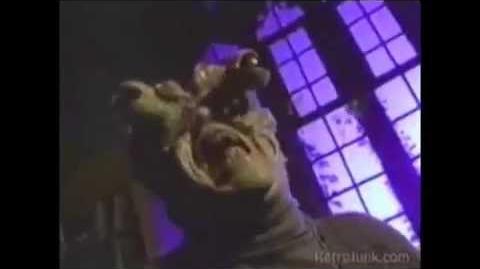