Welcome to Camp Nightmare
The Girl Who Cried Monster is the eighth book in the original Goosebumps book series. It was first published in 1993.

The cover illustration shows Lucy Dark watching Mr. Mortman gripping a bowl of turtles, about to devour a fly.

SHE'S TELLING THE TRUTH... BUT NO ONE BELIEVES HER!

Lucy likes to tell monster stories. She's told so many that her friends and family are sick of it. Then one day, Lucy discovers a real, live monster: the librarian in charge of the summer reading program. Too bad Lucy's told so many monster tall tales. Too bad no one believes a word she says. Too bad the monster knows who she is... ...and is coming after her next.

Lucy Dark is twelve years old and lives in Timberland Falls. Lucy loves to scare her younger brother, Randy, with terrifying monster stories. Much to the irritation of her father and mother, Lucy is obsessed with monsters. Lucy also participates in a summer reading program at the local library. The librarian, a balding man with glasses named Mr. Mortman, tries to get Lucy to read classic literature, but Lucy only wants to read books about monsters.

Shortly after leaving the library one day, Lucy remembers that she had set down her roller blades in it. Lucy goes back inside. She observes Mr. Mortman through the window of his office. Mr. Mortman is sitting in front of his desk, and he pulls out a container full of flies, which he uses to feed his pet turtles. Without warning, Mr. Mortman's head begins to swell, and his eyes bulge and turn black. His mouth becomes a long row of sharp teeth, and he grows claws. Mr. Mortman has become a monster! He proceeds to eat flies from the pan. Horrified, Lucy flees the library. She soon remembers that she still doesn't have her roller blades. When Lucy tries to enter the library again, she discovers that the door has been closed and locked. Lucy tries explaining that Mr. Mortman is a monster to her parents and friends, but nobody believes her story.

A week later, Lucy decides to return to the library in the hopes of catching Mr. Mortman doing something abnormal. She hides in the library after it closes. After a while of waiting, Lucy begins to suspect that her imagination may have gotten the best of her, but all of her doubts are dispelled when she observes Mr. Mortman transforming into a monster again. Mr. Mortman eats some of his flies. More shockingly, Mr. Mortman also eats one of his turtles.

Lucy flees the library again and starts running home. On the way home, Lucy finding her friend, Aaron Messer. Lucy tries to convince Aaron that Mr. Mortman is a monster, but he doesn't believe her. When she gets home, Lucy also tries to convince Randy, but he doesn't believe her either. Suddenly, someone knocks on the door, and Lucy opens. Lucy is shocked to see that it's Mr. Mortman. Kindly, Mr. Mortman returns Lucy's backpack, claiming that she forgot it in the library. Mr. Mortman leaves at the same time that Lucy's mother arrives home.

Because her parents won't believe her, Lucy asks Aaron to accompany her to the library so he can observe Mr. Mortman transforming into a monster. However, on the day that he's supposed to appear, Aaron fails to show up, so Lucy goes to the library alone. This time, Lucy is taking a camera with her so she can record some evidence. At the library, Lucy sees Mr. Mortman transforming into a monster, so she takes a picture of him. Unfortunately, the camera's flash activates, and Mr. Mortman becomes aware of her presence. The monster pursues Lucy through the library. Fortunately, she manages to escape. Later, Lucy begins to develop the photo, hoping that it will provide her with the proof she needs. However, when it develops, Lucy finds that the photograph only shows an empty desk.

Refusing to give up, Lucy formulates a new plan; instead of going to the library, Lucy will investigate Mr. Mortman's house. Lucy, accompanied by Aaron, follows the librarian to his house. Lucy spies on Mr. Mortman through an open window. Wanting to gain a better vantage point, Aaron looks for a ladder. While he is distracted, Lucy watches Mr. Mortman eating unpleasant dishes such as raw fish, snails, and eels. Aaron doesn't see any of this. Mr. Mortman's sees Lucy, and Aaron flees. When Mr. Mortman asks her what she is doing at his house, Lucy says that she was visiting him to tell him that she will no longer be attending his reading program. Lucy goes home and talks to her parents about quitting the reading program, but they won't let her.

The next morning, Lucy is forced to go to the library. When she arrives, she discovers that nobody is there. Mr. Mortman appears and locks the door behind her, telling her that he won't let her escape. Mr. Mortman transforms into a monster and tries to attack Lucy, but she quickly runs away from him. Lucy exits the library through a window. Lucy runs into Aaron. He tells her that he had hidden in the library and observed Mr. Mortman turning into a monster. Aaron apologizes for his prior disbelief. With Aaron as a witness, Lucy tells her parents about Mr. Mortman. Lucy's parents decide to invite Mr. Mortman to dinner.

A few nights later, Mr. Mortman appears at Lucy's house. After a brief talk, Mr. Mortman asks what they will be eating for dinner, and Lucy's parents quote "You are". Mr. Mortman is frightened by this comment. Lucy's parents begin to transform into their monster forms and they devour the librarian alive. Lucy and Randy encourage their parents all the while. Although Lucy and Randy are also monsters, they can't join in as their fangs haven't grown yet. Lucy's parents explain that they don't want more monsters moving into their neighborhood. If there are too many monsters, the regular citizens will get scared and chase all of the monsters out.

That night, Lucy tells Randy another scary monster story. When she is caught by her mother, she scolds Lucy and tells her to stop telling monster stories. 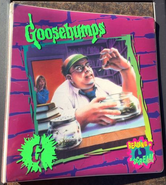 The Girl Who Cried Monster was adapted into an episode of the Goosebumps TV series, as the fourth episode of season one. 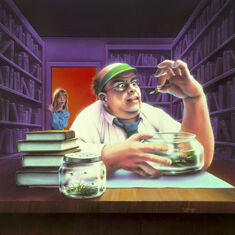 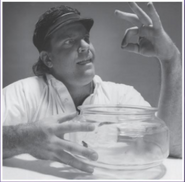 Tim Jacobus posing as Mr. Mortman for the cover artwork.

The original printing of this book included a bookmark tear-out. This would be the first book to feature a tear-out inside the book.