Goosebumps Wiki
Register
Don't have an account?
Sign In
Advertisement
in: Books, Goosebumps SlappyWorld, Books Released in 2018,
and 14 more

It's Alive! It's Alive!
The Ghost of Slappy is the sixth book in the Goosebumps SlappyWorld book series, and the eleventh book of the Living Dummy saga. It was published in 2018.

The cover illustration depicts Slappy as an evil ghost with blue mist surrounding him.

Ghosts are everywhere. Shep Mooney knows this is true. That's because he has a ghost of his own. She lives in his basement and always shows up to scare him when he goes down there. But Shep is about to have bigger problems. When the world's most evil ventriloquist dummy shows up, the real fun starts—well, fun for Slappy. Home isn't safe and now school isn't, either! Will Shep be able to survive the most powerful version of Slappy yet?

Shep Mooney has a ghost named Annalee in his basement that makes him scared to go down there. He tried telling his sister his parents about her but they don't believe him. Shep is about to go on an overnight trip with his class, lead by his teacher Mr. Hanson, whom the students have named "Horrible Hanson" because he's into horror movies and likes to scare them.

On the bus, Hanson uses Slappy who he found in his attic, as one of his pranks. He also brought him to life the night before, assuming the information on Slappy he found online was just a myth. Slappy takes over the bus but he's able to use the magic words again to put him back to sleep.

After explaining the situation to the kids, Slappy vanishes without a trace. When he gets home, Shep discovers Slappy in his bag, as it turns out Shep's former friend Trevor put him there to scare him. Patti finds the words in his pocket and brings him to life. Slappy is eventually stored in the garage, but he escapes and goes to the graveyard to see if Shep will follow him, like a loyal slave.

Shep falls into a grave, but he manages to pull Slappy in, and his head hits a rock, which finally kills him. It doesn't take long for his spirit to rise up to torture Shep in school, by doing things like messing with his classmates' food and trying to kill him the next night.

Shep goes to his friend Carlos' birthday party, which is being held at a ranch where they will ride horses. Slappy shows up to make Shep's horse go out of control and ruin the party, which causes Carlos to lash out at Shep. Shep figures he can bring Slappy back to life by repairing him, so he will be easier to deal with.

Slappy comes back to life but their struggle is interrupted by Annalee. She reveals that she was selfish in life and needs to do a good deed as part of her unfinished business. She does her good deed, by ripping up the paper with the magic words on it, as Shep always ran away before she could explain why she's here and Slappy didn't do that. Having done her good deed, she leaves, and Slappy gangs up on Shep, asking, "Now, slave, where were we?". 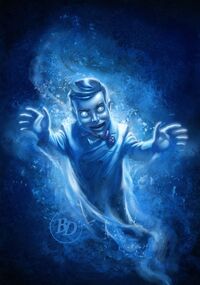