There's a strange new kid on the block....

The Haunted Mask
The Ghost Next Door is the tenth book in the original Goosebumps book series. It was first published in 1993.

The cover illustration features a ghost's feet standing on a welcome mat, and a door open with a person's foot visible. The Classic Goosebumps reprint shows a ghostly hand reaching for a monster like door knocker.

"HOW COME I'VE NEVER SEEN YOU BEFORE?"

Hannah's neighborhood has just gotten a little—weird. Ever since that new boy moved in next door. But when did he move in? Wasn't the house empty when Hannah went to sleep the night before? Why does it still look deserted? She's not getting any answers from her new neighbor. He just keeps disappearing in the oddest ways. And he's so pale... Is Hannah being haunted by...the ghost next door???

It is summer vacation, but Hannah Fairchild isn't having much fun. All her friends have left Greenwood Falls for vacations. Even though Hannah writes letters to her friends, they never write back. Not even Hannah's neighbors seem to pay attention to her. To pass the time, Hannah makes campfires in the backyard of her house and tells ghost stories to her younger brothers, Bill and Herb.

One night, Hannah has a terrifying dream about her house burning. However, she is able to dismiss the dream when she wakes up the next morning. Later in the day, Hannah discovers that a new family has moved into the house next door. Hannah meets one member of this new family, Danny Anderson; Danny is twelve years old, the same age as Hannah. Hannah does not recall Danny's family moving into the house. She thought the house was abandoned.

As the days go by, Hannah begins to become suspicious of Danny. He mysteriously disappears every time she turns around or becomes distracted. Hannah begins to suspect that Danny is actually a ghost. Meanwhile, Danny befriends Alan Miller and Fred Drakes, two spoiled children who are always getting into trouble. Hannah attempts to reaffirm her ghost theory by spying on Danny, but she discovers that she is being spied upon and stalked by a shadowy figure.

Danny accompanies Alan and Fred as they perform vandalism around Greenwood Falls. They decide to go to the home of Mr. Chesney, the postmaster of the city, to destroy his mailbox. They are quickly caught by Mr. Chesney, but the postmaster only seems to pay attention to Alan and Fred. Hannah, observing in silence, witnesses this, and this event seems to validate her theory that Danny is a ghost since he can seemingly avoid Mr. Chesney's detection. After their scolding, Alan and Fred tell Danny that they are going to get revenge. Once Alan and Fred leave, Hannah confronts Danny. The two begin arguing, and Hannah accuses Danny of being a ghost. Danny tries to push Hannah, but his hand passes through her chest. Scared, Danny runs away. Hannah slowly realizes the truth; she is the ghost.

Shortly after realizing this, Hannah overhears one of her neighbors, Mrs. Quilty, talking with a friend. The neighbor explains that the Fairchilds died in a house fire caused by one of Hannah's backyard campfires. In disbelief, Hannah enters her home, only to find it empty. She realizes that this is the reason why nobody paid attention to her except for Danny. After this realization, Hannah faints.

Hannah wakes up in the night and rushes to find Danny. She sees him sneaking into Mr. Chesney's house with his friends. Soon, the boys set the house ablaze from the inside, and only Alan and Fred manage to escape. Hannah runs inside the house to save Danny, but she is met by the shadowy figure. Hannah confronts the dark figure and removes his hood, only to reveal Danny's face. The shadowy figure explains that once the real Danny dies, he will be sent to the shadow realm, and the figure will be set free. Refusing to let her friend die, Hannah manages to save Danny, leaving the shadowy figure behind.

Hannah and Danny manage to escape from the burning house as ambulances begin arriving at the scene. Back home, Danny explains to his mother, Mrs. Quilty, and Mr. Chesney that Hannah saved him, but nobody believes him. They try to explain to him that Hannah passed away five years ago. Hannah, who followed Danny home, begins to notice that everything around her is fading. She hears the voices of her parents calling for her to return to them. As Hannah begins fading away from the real world, she cries a final goodbye to Danny, asking that he never forget her.

Knock Knock... Who's There? sweatshirt. 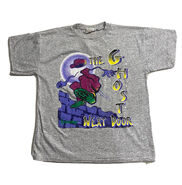 The Ghost Next Door was adapted into a two-part episode of the Goosebumps TV series. It is the third (part one) and fourth (part two) episode of season four, and the sixty-ninth and seventieth episode overall. 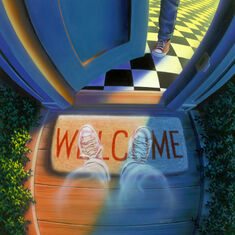 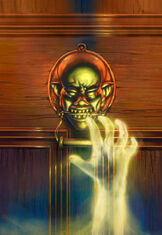