Goosebumps Wiki
Register
Don't have an account?
Sign In
Advertisement
in: Books, Holidays, Hall of Horrors,
and 16 more

Night of the Giant Everything

Why I Quit Zombie School
The Five Masks of Dr. Screem is the third book in the Goosebumps Hall of Horrors book series. It was published in 2011.

Monica Anderson thinks her biggest problem is taking her karate-chopping younger brother, Peter, trick-or-treating on Halloween. But she is wrong. After knocking on the door of an old, creepy house the kids are met by a strange woman pleading for their help. The evil Dr. Screem is after five horribly ugly ancient masks. These artifacts have the power to manipulate the world around them. Monica and Peter don't want to help, but when their house and family disappear, they must retrieve the masks and defeat Screem. Unfortunately, nothing on Halloween is what it appears to be....

The Story-Keeper introduces Monica Anderson — a twelve-year-old girl, holding a mask — to the Hall of Horrors. She promptly begins her story.

It is Halloween night in the town of Hillcrest, and Monica is forced to go trick-or-treating with her annoying brother, Peter. Peter insists on trying to collect candy from an old, ominous house. When the kids arrive at the door, they are greeted by a woman, who introduces herself as Bella. The woman says she's been expecting the kids' arrival and calls them by their names. Bella shows the the siblings The Hallows Book, an old-looking book, which inexplicably contains the duo's names and a prediction that they will help Bella. As the kids wonder about the book, more writing magically appears. The text voices their concerns, but predicts that they will stay, supposedly for the sake of the entire world.

Bella reveals a secret rack of masks, and the masks begin wailing. The woman claims that the masks were made by a sorcerer named Hallows, and she's been guarding the masks for a hundred years. Bella explains, that Hallows naively gave the masks to the evil Dr. Screem before dying; Hallows also cursed Bella so that she couldn't steal the masks directly. Supposedly, every year, Dr. Screem steals the masks from Bella, and she must annually acquire help to steal them back before the man can use their magic for evil.

Dr. Screem enters and uses a blast of magic to locate and steal the masks. The man threatens the children to not interfere, and they run away. When the siblings return to where there house should be, they find that the building has vanished. Peter concludes that their house was erased by Dr. Screem as a display of power. The kids try to talk to their neighbors, but the usual residents have seemingly been replaced by an unknown elderly couple, and they claim no house has ever been next to theirs.

Monica and Peter return to Bella's house and agree to help. Bella says that the children can defeat Screem by collecting and wearing each of the hidden masks — one on top of another — before dawn. Before leaving on their journey, Bella warns the children that Screem is an exceptionally good liar. The kids leave and run through the streets. They quickly find the insect mask tucked into a bush, but it's crawling with bugs inside. Thinking of her parents, Monica puts the mask on. She briefly feels insect bites before closing her eyes. However, the pain stops quickly, and she looks around — only to realize she's been transported within a wooded area.

The siblings are attacked by two giant, mantis-like creatures. The creatures begin wrapping the kids in webbing, but the kids escape. The kids find themselves back by Bella's house, but she is gone. Peter recommends looking for the mummy mask at the local museum, as it has a mummy display. The kids arrive and manage to enter through the back as a crowd of people are leaving. Peter finds the mask in a mummy display. The kids are almost caught by Museum guards, but Peter puts on the mask, teleporting him and his sister to a location that appears to be ancient Egypt. The children are surrounded by priests, who try to catch the siblings and throw them into a cauldron of hot tar, presumably to begin mummify them. Monica uses her gymnastics skills to swoop her brother away from the men. The siblings are enveloped in a sandstorm, which brings them back to the outside of the museum.

Monica guesses that the Himalayan wolf mask will be located at Wolf Hill, which turns out to be correct. However, the mask is worn be a large dog. Monica quickly snatched the mask and puts it on, teleporting her to a snowy mountainside. Monica has been turned into a wolf, and she is guarding a rabbit she intends on eating. Peter approaches and she attacks, throwing him off the mountain. As soon as Peter screams, Monica comes to her senses and grab Peter with her fangs before he falls. The duo is swept away by an avalanche and transported back to the empty lot where their house once was. Peter suggests that they look for the skull mask at the town's oldest graveyard, so the kids head that way.

At the graveyard, the kids are scared by a living skeleton, causing them to fall into an open grave. Dr. Screem, wearing the skull mask, mysteriously appears. He takes off the mask, helps the kids escape the grave, and tells them their work is done. Screem reveals that, if he doesn't have the masks by dawn, Bella's evil will spread throughout the world, and it was her who made the siblings' parents and house disappear. Monica, remembering Bella's warning, tells Peter not to listen, as Screem could be lying. Screem tells Monica that "Bella" is short for Belladonna, which is also the name of a poisonous plant. Peter tried to kick Screem, and the two topple into the open grave. Monica looks for the two, but they've seemingly disappeared. She soon realizes there is a tunnel in the side of the grave. There, she finds Peter, and he's holding the remaining two masks.

The two rush back to Bella's house, and she lets them in. She demands that they hand over the masks. Peter silently refuses. Bella begins berating him with insults, and he takes off his mask, revealing "Peter" was actually Dr. Screem in disguise. As Screem reveals, Peter believed his story, and the two swapped places in the tunnel. Belladonna lunges for Screem's masks, but the sun has risen and the two disappear. Monica goes outside, and Peter appears, wearing Screem's robe. The two run back to where there gone was, but it hasn't returned. Monica thinks to go back to Bella's house and steal The Hallows Book. The book says Monica and Peter saved the world, but their parents will never return. Monica grabs a pen, crosses out the bottom line and begins writing. Monica writes a new ending in which her and Peter return home with full bags of Halloween candy, but their memory of the night before is wiped, leaving them to their normal lives.

Suddenly, the siblings are standing outside of an old house that they can't remember. Realizing it's late, they run home. The siblings are greeted by their parents, and Peter anxiously unloads his bag of candy on the floor. Five hideous masks unexpectedly fall out and the kids scream as the masks start laughing.

The Story-Keeper compliments Monica's story, and he introduces Matt Krinsky, who will tell the next story. 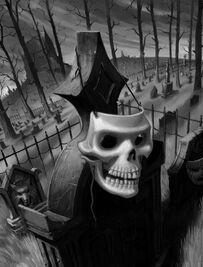