The Dummy Meets the Mummy!

Revenge of the Invisible Boy

The Dummy Meets the Mummy! is the eighth book in the Goosebumps SlappyWorld book series. It was published in 2019.

The cover artwork depicts Arragotus holding Slappy the Dummy upside down. Slappy's body is wrapped in the mummy's bandages.

Cathy O'Connor has seen it all. Her dad owns the local Haunted Horror Museum, a popular location filled with spooky items. The museum has been trying to get its hand on a real mummy for a long time. And this year, a mysterious mummy, Arragotus, has arrived. But when Slappy is dropped at the museum's doorstep the night before Cathy's class is coming, scary things start to happen. The dummy meets the mummy, and nobody is safe. Will it be a wrap for Cathy's friends and family?

Dr. Richard Klopfer is in Egypt with plans to be the first to uncover the tomb of Arragotus. A man from the Egyptian Science Council named Mr. Amari warns him about doing this, as there is a legendary curse that says Arragotus will come to life if he is disturbed. Klopfer thinks this is nonsense and plans to go in anyway.

The next day, he and his team find Arragotus's sarcophagus and see it has words written on the side. Klopfer reads the words and the mummy comes to life. Arragotus starts clawing his face off but Klopfer's assistant, Bella, reads the words again which puts the mummy back to sleep. Two weeks later, Klopfer has survived but he tells his team to send Arragotus somewhere where he can't hurt anyone.

Aaron Riggles is at the dinner table with his family. He tells them his school was visited by a puppeteer named Mandrake the Great and he gave Aaron a dummy named Slappy. Aaron brings Slappy out and he immediately starts insulting the family. They assume he is mechanical and has really good programming, but then he starts spewing green liquid. Aaron tries calling Mandrake but the number he was given is actually for a hardware store. Dad is able to lock Slappy up and he tells his family they won't see Slappy again.

Cathy O' Connor's father, Colin, owns the Haunted Horror Museum, and after many years of wanting one, it finally has a mummy. Cathy's class is planning to have an overnight there the next night and she and her dad, along with her sister Shannon and cousin Logan, are getting the place ready for it. Suddenly, a chest containing Slappy is dropped by someone behind the museum.

Dad leaves to pick up mom from work, and Slappy soon starts insulting the kids and making a mess. The chest came with papers that have strange words on them, which Cathy reads and they put Slappy back to sleep. Dad comes home and the kids tell him what happened, but he doesn't believe them.

A few hours before the overnight, Shannon reads some words written on the side of Arragotus's sarcophagus and suddenly the mummy wakes up. Dad witnesses this but he fails to get the mummy to go back to sleep. Cathy manages to get him back into the sarcophagus and she reads the words again, which put him back to sleep. Dad wants to cancel the overnight due to this but the class is already arriving.

He decides to let them stay as long as no one goes into the mummy room. He organizes a scavenger hunt where the kids look for amber stones with insects inside them. After they're done, he shows the class Slappy to keep them from getting bored. Aaron is in her class and recognizes the dummy right away. Dad tells the kids about the legend of Slappy and has some papers about him. Some papers about Arragotus got mixed in, so when one of the kids tries to bring Slappy to life as a joke, Arragotus is awoken instead. He remembers how Cathy defeated him before and wants revenge.

Aaron brings out Slappy, and thinks that if they bring him to life, the dummy will use his powers to help stop the mummy. They read the words to bring him to life, but he has no interest in helping the kids. Arragotus sees Slappy and starts fighting him. He tries to stop Arragotus with his laser eyes but it doesn't work so he brings a dinosaur skeleton to life to fend off the mummy. However, Arragotus defeats it with a few powerful punches.

In one last desperate plan, Slappy frees all the insects that were trapped in the amber stones. The insects swarm around both the mummy and the kids. This doesn't deter Arragotus and he picks up Cathy and Shannon. However, Shannon holds him off by tickling him. She tickles him until the mummy dies once again.

Slappy is still alive, happy that there's no one to get in his way. Cathy finds the paper with the magic words on it so she can put the dummy to sleep. However, she says the words to bring Arragotus to life instead. 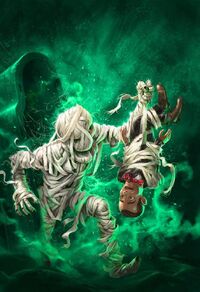 Retrieved from "https://goosebumps.fandom.com/wiki/The_Dummy_Meets_the_Mummy!?oldid=127260"
Community content is available under CC-BY-SA unless otherwise noted.