Goosebumps Wiki
Register
Don't have an account?
Sign In
Advertisement
in: Books, Give Yourself Goosebumps, Animals,
and 16 more

Night in Werewolf Woods
The Deadly Experiments of Dr. Eeek is the fourth book in the Give Yourself Goosebumps gamebook series. It was published in 1996.

The holographic prism design consists of orange colored dots that are filled in and not filled in. The cover illustration consists of a Vamporilla (drawn to look like a chimpanzee) in a lab coat on top of a lab table, mixing green slime in beakers, petri dishes, test tubes, and bunsen burners.

HE'S OUT TO TAKE OVER...YOUR LIFE!

Top secret and dangerous. That's what your mom, a famous scientist calls the research she's been doing at the labs of Dr. Eeek. You're dying to know what it's all about. Then one day you get lost in the labs. Before you know it, you've become a human guinea pig in Dr. Eeek's deadly experiments!

If you choose one lab, you'll meet a dog wearing sneakers. He's half dog, half kid. And now he's after you! If you choose another lab, you get lost in a maze--a maze that just happens to be the home of an enormous rat!

The choice is yours in this GOOSEBUMPS adventure that's packed with over 20 super spooky endings!

You and your friend, Sam, are waiting for your mother in the labs of esteemed scientist Dr. Eeek, which is high in a skyscraper. The secretary leaves and you decide to search for your mother. You encounter Dr. Eeek, who is willing to pay you to help out in some experiments. But these experiments aren't exactly safe... Some of the experiments include being attacked by a blob that grows, getting lost in a maze which is inhabited by a massive rat, meeting a half-human half-dog hybrid, and getting lost in a virtual reality universe. 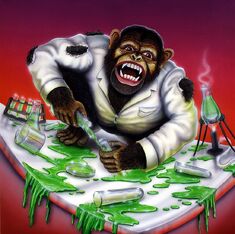