What will wake the dead?

Let's Get Invisible!
The Curse of the Mummy's Tomb is the fifth book in the Goosebumps book series. It was first published in 1993, and was later followed-up by the twenty-third book, Return of the Mummy.

The 2009 reprint has a similar mummy except it has its arms stretched ominously.

SOMETHING DEAD HAS BEEN HERE....

Gabe just got lost—in a pyramid. One minute, his crazy cousin Sari was right ahead of him in the pyramid tunnel. The next minute, she'd disappeared. But Gabe isn't alone. Someone else is in the pyramid, too. Someone. Or some thing. Gabe doesn't believe in the curse of the mummy's tomb. But that doesn't mean that the curse isn't real. Does it?

Gabe is spending his Christmas vacation in Egypt because his parents have business to attend to there. While staying in their hotel in Al-Jizah, Gabe's parents receive an emergency phone call and have to rush to Alexandria. Rather than going with his parents, Gabe is given the option to stay with his uncle Ben, who is a scientist investigating pyramids in Cairo. Gabe's parents call Uncle Ben and leave. While Gabe waits for his uncle to arrive, he clutches his good luck charm, The Summoner, a mummy's hand that he bought a few years ago at a garage sale. Uncle Ben and his daughter, Sari, arrive. Ben informs Gabe that his archaeologists team has discovered underground tunnels beneath the pyramid, but he also says that the tunnels would be too dangerous for Gabe to explore alone.

The next day, Ben and the children go to the pyramid. While preparing to enter the pyramid, Ben warns the kids that his team may have unleashed an ancient curse by exploring the pyramid. Armed with flashlights, the three relatives enter the pyramid and walk for a while. The trio makes there way through a tight corridor to a large room. Ahmed and various other members of Ben's team are already there. While Ben is distracted, Sari suggests to Gabe that they go exploring on their own. Gabe is reluctant, but Sari insists, confidently saying that they won't get lost. Gabe follows Sari into the tunnels, but Sari quickly vanishes from his view. Convinced that he's being pranked, Gabe continues walking. When Gabe enters a small room, Sari scares him and starts to laugh, causing Uncle Ben to appear. Ben joins Sari in laughter.

The next morning, during breakfast, Ben receives a phone call. Apparently, almost all of Ben's workers have become ill, so he goes and visits them. Though the kids were warned to stay in the hotel, Gabe proposes that they go to a nearby museum by themselves. The kids go to the museum and wander through it. After a few minutes, Ahmed appears. They try to avoid him, but he's too fast. He says that Ben told him to take the kids back to their room in the hotel. Ahmed takes the kids to his car, but he starts driving in the opposite direction of the hotel. Gabe realizes that Ahmed is kidnapping them. Gabe warns Sari, and the two sprint out of the car. After asking a cab driver for help, the duo makes it back to the hotel and stay in their room until Ben arrives. When he does, the kids tell him what happened. Ben says that he has to return to the pyramid to continue his exploration. For safety, Ben takes Gabe and Sari with him to the chamber.

A few minutes after they enter the pyramid, Gabe stops to tie his shoe. When he looks up, he sees that Uncle Ben and Sari have disappeared. After searching for a while, the floor cracks beneath Gabe, and he falls through, landing in a big room filled with mummy-preparation tools. Sari appears in the room, and she says she also got lost. The two kids call Uncle Ben via a pager that Ben provided them with. A few seconds after Sari calls her father, the kids see a light coming through a tunnel. The kids hope that Ben has arrived, but the light turns out to be coming from of Ahmed, who is carrying a torch.

Ahmed says that he warned Ben about a curse, but Ben didn't believe him. He then says that the kids violated the sacred chamber of an ancient Egyptian princess named Khala, and, because of that, they should die. He grabs a knife and starts approaching the kids, but Ben suddenly appears and tries to stop him. Ahmed swings his torch at Ben and hits him in the head. Ahmed heaves the torch across the room, and it falls into the room's tar pit. The tar starts burning. The kids watch helplessly as Ahmed closes Ben's body in a sarcophagus, and he puts the kids in a separate sarcophagus. Luckily, Egyptians built hidden escape hatches into their coffins to allow the souls of the deceased to escape, so the three relatives are able to escape while Ahmed is distracted. The trio tries to exit, but they are stopped by Ahmed, who threatens them with his dagger. He forces them to walk toward the tar pit. Ahmed tells Ben and the kids that they'll have to jump into the pit. Terrified, Gabe pulls out the mummy's hand from his pocket. When Ahmed sees it, he recognizes it as the Hand of the Priestess. All of the mummies in the room to come alive and begin surrounding him. Some of the mummies grab Ahmed and try to throw him into the pit. Gabe looks away. However, when he looks back, he sees that the mummies have returned to their original spots, and Ahmed is running away.

Relieved, Ben and the children go back to their hotel room. Gabe pulls out the mummy's hand and pretends he's summoning ancient spirits. He is startled to hear a knock on the door, which he suspects to be a mummy. When he opens the door, Gabe sees his parents, who are back from Alexandria. 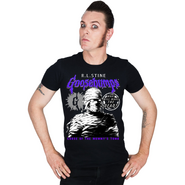 What will wake the dead? T-shirt front.

What will wake the dead? shirt. 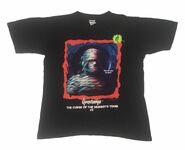 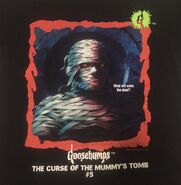 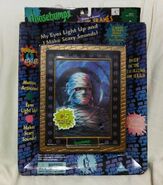 'Do Not Disturb - I'm All Wrapped Up!' Doorknob hanger.

Greeting card (inside)
The MUMMY Hopes You Get All Wrapped Up In Frightening Fun This Halloween!. 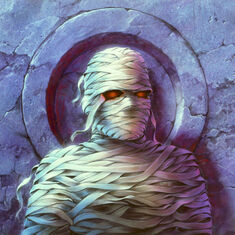 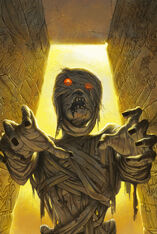 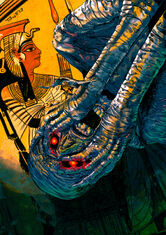 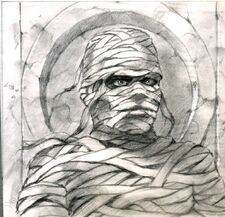 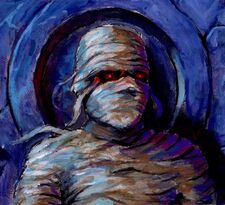 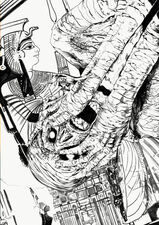 Line Work for the Vietnamese Cover