Goosebumps Wiki
Register
Don't have an account?
Sign In
in: Books, Give Yourself Goosebumps, Ghosts (topic),
and 14 more

The Knight in Screaming Armor
The Curse of the Creeping Coffin is the eighth book in the Give Yourself Goosebumps gamebook series. It was published in 1996.

The cover illustration depicts a coffin being opened by a rotting skeleton inside it. The skeleton's bony fingertips have left scratches on the coffin lid. On the top of the coffin "RIP" is engraved.

You're off to visit your grandmother, whose house backs up to a graveyard. At first the tombstones seem far away. But every day they move a little closer. Then you discover the headstones are disappearing. But the dead aren't gone — their ghosts are moving. Right into your grandmother’s house!

Spanish (La Maldición del Ataúd - The Curse of the Coffin)

German (Der Fluch Der Ruhelosen - The Curse of the Restless) 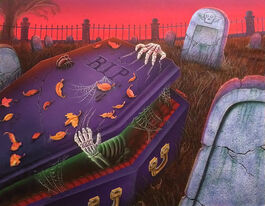