Grin and bear it!

Revenge of the Body Squeezers
The Curse of the Cave Creatures is the fifth of the special editions of Give Yourself Goosebumps. It was published in 1999.

The cover illustration depicts an enormous, angry bear materializing out of a cavern wall with petroglyphs on it.

GRIN AND BEAR IT!

You’re hiking in the Arizona desert when you spot a cave. Your first mistake: entering. Your second mistake: upsetting the evil Cave Spirit. Because now the Cave Spirit wants to take the spirit out of you!

How can you defeat this evil spirit? By fighting it on its own terms as a Hunter or a Spell Caster. And by choosing the best three weapons or magic spells—to protect yourself. Which spell will drive away millions of angry bugs and an evil sorceress? Which weapon will soothe a thrashing, growling bear? Choose well—or it’s farewell to you!

Whilst visiting your cousins in Arizona you go exploring in a cave, find an animal skull, and drop it. Suddenly, a Shaman appears and says that you have displeased the Cave Spirit; for which you are to be turned into a petroglyph on the cavern wall. Your only hope of avoiding this fate is to become a "worthy opponent" to the Cave Spirit and defeat him in a fair fight. From here, you have a choice of turning into either a hunter or spell caster, and have to pick from a list of items to use. Like the books in the main series, this one has two storylines.

You choose to become a hunter,you pick three out of four magical weapons to use in addition to a sword that the Shaman gives you. The Cave Spirit will appear to you like an animal, meaning that all animals (including pictures and anything at all that could have an animal on it) are dangerous to you. You then try to survive as the Cave Spirit takes the form of different animals in order to attack you.

You choose to become a spellcaster and are given a wand. you then have to choose from three of four talismans which can cast spells for you. However, these spells may backfire, and when using the wand you have to be very careful how you phrase your words.

There are twenty-six bad endings and two good endings. 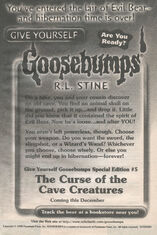 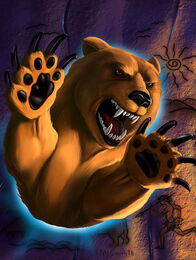 Retrieved from "https://goosebumps.fandom.com/wiki/The_Curse_of_the_Cave_Creatures?oldid=132804"
Community content is available under CC-BY-SA unless otherwise noted.