Keep your eye on the birdie!

The Cuckoo Clock of Doom is the twenty-eighth book in the original Goosebumps book series. It was first published in 1995.

The illustration on the cover shows a sinister cuckoo bird emerging from a cuckoo clock.

Tara the Terrible. That's what Michael Webster calls his bratty little sister. She loves getting Michael in trouble. Making his life miserable. Things couldn't get any worse. Then Mr. Webster brings home the antique cuckoo clock. It's old. It's expensive. And Mr. Webster won't let anyone touch it. Poor Michael. He should have listened to his dad. Because someone put a spell on the clock. A strange spell. A dangerous spell. And now Michael's life will never be the same again...

Michael Webster has to deal with his annoying little sister Tara, who is always lying and getting him into trouble by their parents. Unfortunately, Tara never gets blamed for these things. On his twelfth birthday, Tara ruins everything. She scratches his present, a new bicycle, tells his crush that Michael likes her, opens all of Michael's presents ahead of him, and purposely trips Michael while he is carrying his birthday cake, resulting in the cake splattering over Michael's face.

A few days later, his father purchases an antique cuckoo clock from a local store called Anthony's Antiques, that is supposed to have one flaw. He had been admiring the clock for fifteen years. It has been said that it was created by a sorcerer and if a person can figure out the clock's secret, it can be used to go back in time. Tara fools around with the clock and her father gets very angry/upset. This gives Michael an idea, however, on how to get back at Tara. That night, when the clock strikes midnight, Michael sneaks downstairs and touches the cuckoo's head and twists it around backwards. He hopes this will get Tara in trouble for sure.

Apparently, this little act is the secret to going back in time. Michael wakes up and realizes that it is his 12th birthday all over again. At midnight, he tries to turn the head back to normal, but he realizes that the clock has not been bought yet. He heads back to bed, and wakes up a few days earlier. He remembers the day was when his frog costume for the play "The Frog Prince" gets its zipper stuck. He tries to change events by not going upstairs after walking like a robot up to his room (implying that the events would happen one way or another) then forcing himself to stop and walk back downstairs; however the girls arrive and although he tries to get out of it, they talk him into doing it anyway.

Michael decides this time to lock the door; unfortunately, he forgets that the lock is broken because it was fixed on his birthday, and the girls see him in his underwear just like before. The next day is worse, as he has a bad day at school when he gets beaten to a pulp by star athlete named Kevin Flowers after Tara sneaks Kevin's favorite cap into Michael's backpack. He starts to worry, and tries to tell his family. They trick Michael by saying things and walking backwards. He realizes when Tara calls him a moron. (She says it as “norom” because they are doing it backwards.)

Michael also realizes that things are going to get worse, and indeed they do; when he wakes up the next morning, he does not notice anything different; however, when he walks in the door of his classroom, he realizes the truth and he is back in third grade.

Michael finds himself disgusted by how immature his friends are, and goes to sleep, while thinking that he might be erased for real. But through the next day, he notices he has much more freedom than before, and is not being pushed by fate into embarrassment.

The next day after that, Michael is in second grade. After Tara pokes him in the eye, he wonders what the pre-Tara years were like since he doesn't remember much from before age five. That afternoon, he heads over to Anthony's Antiques, only to find it closed. He attempts to break a window with a brick, but his father catches him and takes him home, criticizing him for going on the bus alone, but Michael butters his father up so that he would not be too upset. He tries to talk to his father about the clock and he comments that he has been saving up for years to buy it.

The next day, he wakes up and notices he is back in his old bedroom (now Tara's room). Also, he is five years old, and thus in kindergarten. He is bored and inattentive, faced with problems such as tying his shoes. However, since he still has the brain and mind power of a twelve-year-old, he does it very easily. The next day, he wakes up a year younger, his four year old self is taken to nursery school. He confuses his young friends with his teenage level logic; one example is when he climbs a tree, and when they taunt him for being scared, he replies "I'm climbing the stupid tree" and says that means he is not scared. However, he even goes on to break his arm again, just as he did in nursery school.

The next morning, Mike wakes up in what he thinks is prison, until he realizes he can barely walk. He soon realizes that he is a baby, wearing a diaper. Unable to escape his crib because of his weakened muscles, and unable to talk properly, he feels trapped. After having a bottle-feeding, a diaper change and a minute in the baby pen, Michael starts to feel like he will never get to the clock and that this day as a baby might be his last. Even if it isn't, he would be too young to do anything on his last day where logically he'd be a newborn.

His mother takes him to see his "daddy" at work and Michael realizes this is his chance. His parents are heading into Anthony's Antiques. While his parents look for a new kitchen table, he crawls quickly towards the cuckoo clock. Just as it rings for a twelfth time, he grabs the head and twists it forward again, then sets the year dial to 1995, accidentally knocking an unknown year off in the process. In a bright flash of light, Michael is taken back to the morning of his 12th birthday.

Although it's not quite the present, Michael is almost happy to see his little sister Tara again, but he can't seem to find her.

During his 12th birthday without Tara, his bike isn't scratched at all, his birthday cake is actually eaten and Mona's best friend tells Michael that Mona has a crush on him, which makes Mona blush.

A few days later when the clock is delivered, Michael discovers a defect; its year dial is now missing one year — the year in which Tara was born. Michael realizes that, after that year was knocked off, when time reset to the present year, its skipped the year that Tara was born. This defect prevented Tara from coming into existence. Michael states that he plans on eventually going back for Tara; however, because of the humiliation Tara put him through earlier in the book, it is unknown when or if Michael will do this. 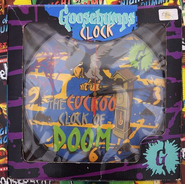 The Cuckoo Clock of Doom was adapted into an episode of the Goosebumps TV series. It is the third episode of season one. 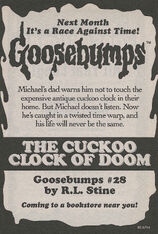 Book advertisement from A Night in Terror Tower. 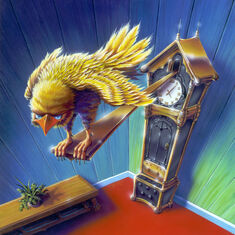 Retrieved from "https://goosebumps.fandom.com/wiki/The_Cuckoo_Clock_of_Doom?oldid=111909"
Community content is available under CC-BY-SA unless otherwise noted.