"The Cuckoo Clock of Doom" is the third episode of season one of the Goosebumps TV series. It premiered on November 3, 1995 on Fox during the Fox Kids block.

Tara gets Michael in trouble.

Michael twists the head of the cuckoo bird around.

Michael is sent back to his twelfth birthday.

Michael is sent back to when he was six.

Michael runs to the antique store only to find it closed.

Michael is sent back to when he was a baby.

Michael knocks out the year "1988" on the cuckoo clock.

Michael twists the head of the cuckoo bird back around.

Michael returns to when he was twelve.

Tara is erased from existence.

Michael decides he will not go back for Tara. 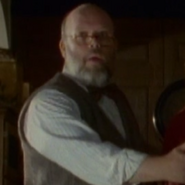