The Cuckoo Clock is a magical clock that allows people to travel in time. It appears in the twenty-eighth Goosebumps book, The Cuckoo Clock of Doom, and its television adaptation.

Michael's dad says that the clock was built in 1800 in the Black Forest of Germany. He said that legend has it that the man who built the clock had magical powers and put a spell on the clock. If someone can figure out the secret, he or she can go back in time. This secret is revealed to be in the cuckoo bird itself. Michael decided to (as a way to get back at his sister Tara), twist the cuckoo's head backwards, but found out the hard way that doing so reversed the flow of time and eventually regressed his age back to a baby. Only by returning it to normal does time resume its natural course. Also, as suggested by the The Cuckoo Clock of Doom, it is possible to erase events from one's timestream by removing specific year markers from the side of the clock.

The clock is mostly black. It is decorated with silver, gold, and blue designs, scrolls, carvings, knobs, and buttons. The clock has a white face with gold hands and gold Roman numerals. There are secret doors hidden under the paint designs, and a big door in the middle of the clock.

On the right side of the clock, there is a dial starting at 1800 and ending at 2050. There is only one hand on the dial and it points to the current year. Beneath the dial is a little gold button set into the wood.

The cuckoo bird as depicted on the UK cover of The Cuckoo Clock of Doom. 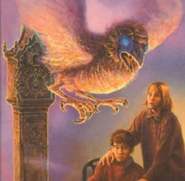 The cuckoo clock as depicted on the Dutch cover of The Cuckoo Clock of Doom. 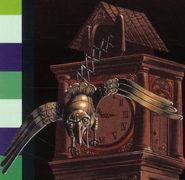 The cuckoo clock as depicted on the French cover of The Cuckoo Clock of Doom.
Add a photo to this gallery

The Cuckoo Clock as seen in the Goosebumps film.
Add a photo to this gallery

Retrieved from "https://goosebumps.fandom.com/wiki/The_Cuckoo_Clock?oldid=137275"
Community content is available under CC-BY-SA unless otherwise noted.