Goosebumps Wiki
Register
Don't have an account?
Sign In
Advertisement
in: Books, Give Yourself Goosebumps, Robots (topic),
and 20 more

Scream of the Evil Genie

Please Don't Feed the Vampire!
The Creepy Creations of Professor Shock is the fourteenth book in the Give Yourself Goosebumps series. It was published in 1997.

The cover illustration shows the upper half of an unfinished, menacing robot extending an arm towards the viewer. The robot is strapped to a wall, with metal parts and machinery surrounding it. The robot's left hand is disconnected and lying on a nearby table. The bottom half of the robot is absent.

You and your friends decide to check out a new part of town. That's when you notice an old house with a sign that says "BEWARE—DANGER" on one side and "PLEASE COME IN" on the other. Of course, you decide to go and see what's up.

The old man who lives there tells you hes looking for help cleaning out his garage. And you find a secret room. Inside there's a robot and mirrors and all kinds of great stuff. If you look in the mirrors you'll find yourself in a place where everything is backwards. If you turn on the robot you'll be walking in a metal wonderland. Can you get back before you become a pile of nuts and bolts?

You and your best friends, Jason and Stacey (who are twin siblings), take a job cleaning the garage of an inventor. You and your friends are told to avoid a particular door in the garage but you enter it anyway. Once inside, the three of you find a robot and a pinball machine, with a choice to press the button for either one.

You switch on the robot, which comes to life and destroys the room. A box gets smashed and you think it looks like something important, so you pocket the remains hoping to fix them before Professor Shock notices. At this point, Professor Shock comes in and deactivates the robot. He is so angry that you run away from the house. Back at home, you reassemble the box, which turns out to be a remote control. You discover that it controls all the machines in the world. This storyline then follows you getting caught up in a war between machines and humanity.

You switch on the pinball machine. Nothing happens at first; but then you hear Professor Shock coming, and you hide behind the pinball machine, along with Stacey and Jason. At this point, you all get sucked into a large mirror that was stored behind the machine. You then end up in a strange world where everything works backwards; and have to find a way to escape. 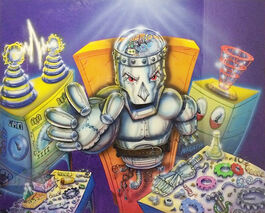