An image on this page is poor quality. Please upload a higher quality version of the image if available.

Additional information:  Please try to find a higher quality image of the camera from Goosebumps HorrorTown.

This particular camera is known for its exclusively negative function, in which it alters the future to a bad occurrence, incorporating elements its flash exposes into this new event. On occasions, it creates an event which kills one or more humans (so far it has only been humans) and absorbs their souls.

The camera did not always cause fear, harm and fatalities. After its structure was completed, its inventor (who is never named, nor confirmed to be alive) added finishing touches that he felt necessary to the camera (these aren't specified). Potentially, the inventor intended it to be the new fill for the role of best photograph technology, for as long a period of time as possible. Before he could unveil his invention, his lab partner, Dr. Fritz Fredericks (a.k.a. Spidey), stole the camera to take credit for the invention, with an aspiration to enjoy the fame and riches that he believed would come his way. The inventor ruined Dr. Fredericks' plan by somehow cursing the camera for all eternity.

In Say Cheese — and Die Screaming!, the camera's origin is different. It was a one of a kind prop camera that was built for a 1950s horror movie called Say Cheese — and Die Screaming! However, when it was used during production, strange accidents continued to happen on set eventually leading to the film being cancelled. The camera disappeared, eventually finding its way to a garage sale where Julie Martin ended up taking it.

In the books, the camera is described as looking similar to an old Polaroid brand camera despite the brand never being mentioned.

In the television series, the camera has a bizarre design, looking almost like a toy spaceship.

The camera has the power to steal souls and is completely indestructible. When a picture is taken, the image that develops does not show what is in the present, but what will happen to the person/object in the image in the future. For example, when Greg takes a picture of his family's new car, the image develops as the car completely wrecked (indicating that a car accident will occur). In later installments, the pictures taken can also affect one's physical appearance. Be it making them fat or thin, turning their skin into scaly reptile skin, or giving them a bumblebee head. If a picture of someone gets caught in its mechanism, it can cause the victim to suffer the painful sensation akin to their torso being cut in half.

It remains to be determined as to what becomes of the souls the camera captures. Of particular interest is whether or not souls increase its power.

The Camera cannot move on its own and cannot force anyone to find it and use it. As long as it is well hidden, its powers are useless. If a picture is taken of itself, it will create another camera. If the photo taken by the camera is destroyed or changed into a negative, the effects of the camera will be prevented. Should one prevent the events of a photo from happening, the events of the photo and other photos taken by the camera will be nullified.

This section lists photographs taken with the camera as well as victims of its evil.

The Camera as depicted on the UK cover of Say Cheese and Die!. 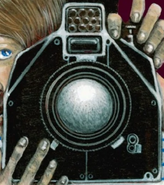 The Camera as depicted on the French cover of Say Cheese and Die!. 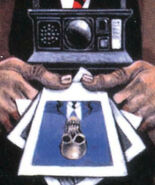 The Camera as depicted on the French cover of Say Cheese and Die - Again!. 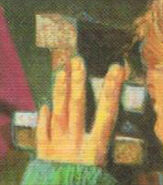 The Camera as depicted on the Dutch cover of Say Cheese and Die!.

The Camera as depicted on the Korean cover of Say Cheese and Die!.