Invasion of the Body Squeezers

The Body Squeezers lived on a planet a few miles from Earth, but one day, they all wanted to have new bodies to hide their appearances. So one of their leaders, Mr. Fleshman flew over to Earth to have a look at the inhabitants, while the other Body Squeezers followed him. One of them already landed in a meteorite and was discovered by NASA, and was shown on the news. Meanwhile, a boy named Jack Archer was spying on Mr. Fleshman, as he had a feeling that Mr. Fleshman was hiding something in his house next door to the Archers'. The Body Squeezers began their invasion on Earth. At first, Jack thought their weakness was water, but was wrong. In the end, Jack destroys their power source, which turns out to be his next door neighbor, Mr. Fleshman, in disguise. When he gets home, he finds a blue creature. His sister Billie says it just wants a hug.

A blue variation of the Body Squeezers are shown invading Earth.

The Body Squeezers appear in the Goosebumps film among the many monsters in the series released by Slappy. They are first seen freezing Officer Stevens and Officer Brooks alongside the rest of the Madison Police Department off-screen. Later, they freeze Lorraine Conyers when she arrives at the police station before appearing during the attack on Zach Cooper's school with the other monsters. Lastly, they are seen at the abandoned amusement park where the final battle with Slappy and the monster army takes place.

The Body Squeezers were determined to have new bodies and they were also determined not to let anything stand in their way. They are also quite vengeful to anyone who defeats them.

The Body Squeezers are big green-skinned beings with oval black eyes, deep nostrils and a small, lipless mouth. And they have two curled tusks and caps of green skin formed over their foreheads, curved and hard like a turtle shell. There are also blue-skinned Body Squeezers, also known as "blue species".

In the Goosebumps movie, they have green heads with bug eyes, they wear a space helmet and a blue and black suit. They carry freeze ray guns that they use to freeze people. 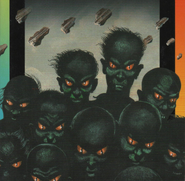 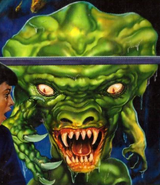 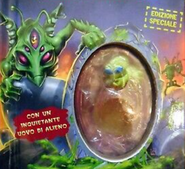 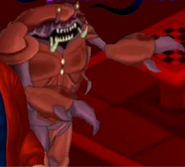