The Ghost Next Door
The Blob That Ate Everyone is the fifty-fifth book in the original Goosebumps book series. It was first published in 1997. It received a Classic Goosebumps reprint in 2015, which was released as a tie-in to the film Goosebumps.

The concept of the monster in this story is an obvious homage to the 1958 film The Blob and the 1988 remake of the same name.

The original 1997 cover illustration depicts the Blob Monster on a neighborhood street with various items, such as cars and bicycles, beneath its large tongue. Tim Jacobus' signature can be found on the front of the Blob's tongue. This is the first book in the original series to feature the Parachute Press logo on the cover.

The 2015 Classic Goosebumps cover illustration features the Blob Monster in a grocery store parking lot with crushed cars and tipped over grocery carts beneath it.

READ IT AND SCREAM!

A famous horror writer. That's what Zackie Beauchamp wants to be. He's writing a story about a giant blob monster. A pink slimy creature who eats up an entire town! Then Zackie finds the typewriter. In a burned down antique store. He takes it home and starts typing. But there's something really odd about that typewriter. Something really dangerous. Because now every scary word Zackie writes is starting to come true...

Zackie Beauchamp loves to write scary stories. His latest one, "Adventures of The Blob Monster", features a scene in which he and his best friend, a girl named Alex Larocci, are eaten by a massive blob creature that looks similar to a human heart. He reads this new story to his friends, and Alex loves it. She says the story is his scariest yet. However, Zackie's other best friend Adam Levin mocks him and says the story wasn't scary at all. After school, Zackie and Alex walk home and find a block of shops that have been completely destroyed by a lightning storm. Curious, Zackie convinces Alex to take a look in one of the shops, despite the warnings on the front of the store. Alex is reluctant and nervous to be in the shop, and tries to convince Zackie to leave. Zackie ignores her, and finds an old typewriter out in the open. He realizes this typewriter would be perfect for writing his scary stories. He attempts to grab it, but is electrocuted by a massive shock from the typewriter. Zackie becomes encased in some kind of blue flame, and is knocked out briefly for a few seconds.

After waking up, Zackie and Alex realize they are not alone in the store, and try to hide. The store's owner, a woman named Mrs. Carter finds them. Mrs. Carter is upset over losing her store, and asks them what they were doing; the two apologize, saying they only wanted to look around. Zackie tells Mrs. Carter he was greatly interested in the typewriter, and that he would be interested in using it for his scary stories. Mrs. Carter replies that he should write a scary story about what happened to the store. Zackie asks if he can buy it for a price, but Mrs. Carter allows him to take it for free.

Zackie lugs the typewriter home and places it in his room. For a brief moment, he sees the type writer encased in blue flame, but by the time his parents arrive to look, it is gone. The following day at school, Zackie talks with Alex about writing his next scary story. Upon opening his locker, a mouse jumps out and scares him. He discovers it was a joke played by Adam. Adam and two twin girls named Emmy and Annie laugh and tease Zackie for getting scared over a mouse. Despite loving to write horror, Zackie is easily frightened. Upset, he storms off, where the rest of the school teases him throughout the day. That night, Alex stays over his house, and Zackie begins to write the new draft of the Blob Monster story on the typewriter. Zackie types in the first line: "IT WAS A DARK AND STORMY NIGHT"

Out of nowhere, a heavy rain storm begins outside the house. This storm causes the power to go out, and Zackie's father fetches some candles. Zackie then types in the next line of the story: "THE WIND BEGAN TO HOWL." Suddenly, the wind grows loud outside.

Zackie then types: "ALEX AND ZACKIE WERE ALONE IN THE DARK HOUSE". The two of them find Zackie's father has seemingly vanished. Alex panics, telling Zackie that there is something wrong with his typewriter. She tells him everything he has written on the typewriter has become true. Zackie laughs, and brushes off the idea. Alex challenges him to write more, to prove her theory.

Zackie types the next line: "THEY HEARD A KNOCK ON THE DOOR."

Following that, the two hear a knock on Zackie's door. In disbelief, Zackie goes to check. He opens the door and finds out that nobody is there. Zackie decides the knocking must of been a tree branch. However, Alex stays by her belief, and tells Zackie that the reason nobody was there was because he hadn't written that anybody was at the door. Zackie is annoyed, but types that Adam was the one knocking at the door. To his surprise, Zackie finds a soaked Adam on the porch. Adam tells the two he isn't sure why he came to the house. Alex tells him that Zackie made him come to the house. Now believing the typewriter is magic, Zackie tells Adam everything he writes on the typewriter is coming true. Adam simply laughs at Zackie, and sneaks over to the typewriter to write a line of his own.

Adam leaves the house, as Zackie and Alex begin to hear noises coming from the basement. They fear that Adam's words have come true. Upon investigation of the basement, they discover it was simply Zackie's father down there, and upon questioning, tells them that he saw nothing weird down in the basement with him. Zackie and Alex then decide everything must of been a strange coincidence, and brush off the events of the night. Zackie gets rid of his ruined draft and writes a new blob monster story. In this one, the blob attacks the town, eating everyone and anything in sight, including police officers trying to stop it. The following Saturday, Zackie is sent by his mother to the grocery store, and discovers the entire town in a panic. The people are shouting that some kind of monster is attacking.

In horror, Zackie sees his story has come true, and the blob monster has come to life.

Like his story, the blob swallows up all the people in its path. At the store, Zackie once again encounters Adam, who teases him about the typewriter some more. Zackie discovers the blob inside the store. Adam walks up to it, believing it to be some kind of balloon. The blob then swallows Adam whole, and Zackie rushes back to his house, grabbing Alex along with him.

He tells Alex what happened, and she tells him that he needs to write an ending if he wants to stop the monster. Zackie attempts to type, but the keys are stuck, and the blob enters the room. Zackie realizes that it is he who has the power to defeat the monster and not the typewriter. He thinks long and hard, wishing that the monster was gone, and all the people it ate would be back. After several seconds, the blob monster finally vanishes as Adam and the others are brought back.

Zackie and his friends begin to celebrate, but it is revealed this was all a story made by an actual blob monster who is reading the story to his monster friends. They like it, but one says the ending is too sad, and that he should change it to a happy ending where the blob successfully eats everyone. The monster decides this is a great idea, and changes the ending of the story to the blob eating them all. 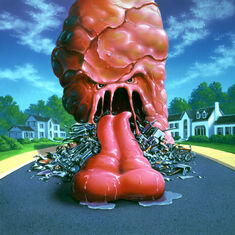 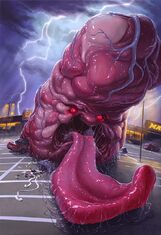 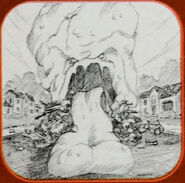 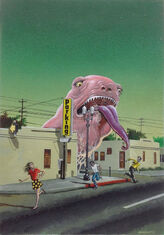 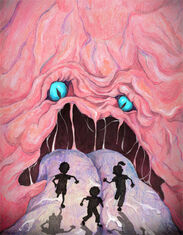 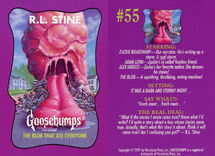 This book's trading card found in Don't Go to Sleep!.