The Blob is the main antagonist in the fifty-fifth Goosebumps book, The Blob That Ate Everyone.

The Blob was created by a 12 year old kid named Zackie Beauchamp on a magic typewriter for a story he was writing. The Blob does everything Zackie writes in his story, including eating his creator's best male friend, Adam. It is defeated when Zackie Beauchamp uses his mind powers to think the blob away, as well as bring his best friend Adam back.

In a twist ending, the story was actually written by the Blob. Another blob in green approved it, especially when the Pink Blob ate Adam. The Green Blob suggests that the Pink one change the ending so that the blob eats everyone.

The Blob appears in the TV adaption of the book, performed by Jason Hopley.

In the Goosebumps film, Slappy and his fellow monsters track R.L. Stine, Zach, Hannah, and Champ to an abandoned amusement park, where Slappy frees the Blob (which he had saved to complete his revenge on Stine). After it consumes the funhouse, Stine distracts the monsters by allowing himself to be swallowed by the Blob. Once the book is complete, the Blob is sucked into the new book.

The Blob is described as a giant pink blob with beady eyes, a huge toothless mouth, and a massive head with thick veins that throbbed like a giant heart. It also had a long, sticky tongue covered in hot drool that it used to grab and devour anyone in its path.

In the TV episode, the Blob looks drastically different than how it was depicted in the book. It appears near the end of the episode as a small yellow blob with purple veins and a rope-like tongue. This version has no eyes, and hosts very sharp teeth.

In the film, the Blob is depicted a gigantic, glowing pinkish-purple mass of amorphous slime. It does not have a distinct shape, and lacks both a "mouth" and a tongue.

Concept art of the Blob from Goosebumps. 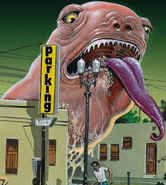 The Blob as depicted on the French cover of The Blob That Ate Everyone.

The Blob as depicted on the Korean cover of The Blob That Ate Everyone. 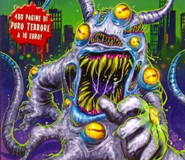 The Blob as depicted on the Italian cover of The Blob That Ate Everyone.

The Blob as seen in the TV adaption.

The Blob eating Adam while his creator Zack watches his best friend get eaten and runs away.

The Blob as seen in the film.

The Blob with Slappy the Dummy.

The Blob in front of Stine.

The Blob's meteorite as seen in Goosebumps HorrorTown.