Goosebumps Wiki
Register
Don't have an account?
Sign In
Advertisement
in: Books, Original series, Books Released In 1996,
and 8 more

The cover illustration depicts a Beast on top of a strange tree surrounded by exotic plants.

EVERY BEAST FOR HIMSELF!

Ginger Wald and her identical twin brothers, Nat and Pat, are lost in the woods. No problem. After all, Ginger did go to that stupid nature camp. Still, there's something odd about this part of the woods. The grass is yellow. The bushes are purple. And the trees are like skyscrapers. Then, Ginger and her brothers meet the beasts. They're big blue furry creatures. And they want to play a game. The winners get to live. The losers get eaten...

Ginger Wald and her family are spending some time camping in a forest. Ginger and her identical twin brothers, Nat and Pat, are told by Mr. Wald to go explore the forest. The kids do this, but they end up getting lost in the woods.

They look for a way back to their family's tent, but they can't seem to find one. At a certain moment, Ginger grabs a yellow stick. This causes yellow sap to ooze onto her hand. Ginger tries to rub the sap off her palm, but the yellow color doesn't come off. A few minutes later, Ginger places her hand on a patch of red moss. Once again, Ginger's hand is stained with the color. Despite these incidents, Ginger continues looking for her parents.

The three kids stop walking when they feel the ground shaking. They initially assume it's an earthquake, but they find that the shaking was caused by a herd of enormous blue-furred creatures with huge gorilla-like faces. Pat tells his sister that they should run, but Ginger says that it would be better to stay quiet. Pat doesn't listen to his sister and starts running away from the creatures. Ginger and Nat follow Pat, but they are caught by the beasts, who are able to speak. One of them touches Ginger in the shoulder and tells her she is "The Beast from the East." The beasts explain that Ginger must tag someone before the sun sets behind the "Gulla Willow", which is a kind of exotic tree. If she cannot, she will be eaten by all the beasts. Ginger and Nat don't want to play the game, but they have no choice.

Fleg, one of the beasts, explains that there are some rules in the "Beast from the East" game that the kids need to know. First, if they step on a Free Lunch Square, which is a square in the forest where the ground is brown, the other beasts are free to eat them. Second, they can only tag someone from their victim's eastern side. Fleg tells the kids various other rules, and the game starts.

Ginger and Nat hide in the woods, but Ginger accidentally touches a blue leaf, and a part of her hand turns blue. Some time later, she is attacked by a group of snakes. Fleg appears and helps Ginger remove the snakes. After this, Fleg leaves, and Nat decides to climb a tree in order to look for beasts to tag. However, he is suddenly attacked by the tree's branches, which are apparently alive. To save her brother, Ginger starts tickling the tree. The tree drops the boy, and the kids run away from the tree.

Nat tells Ginger he saw some beasts behind a giant rock. The two kids locate the rock, but — when they check behind it — the beasts seem to have vanished. Nat touches the rock. This causes the beasts to reappear. The rock turns out to be a Penalty Rock. As a result, Nat has to go to the Penalty Cage and stay there until the end of the game. Ginger is left by herself in the woods. After a short walk, she meets Spork, a beast that is missing one eye. Ginger tags him, but he warns her that she has to tag him from his east-facing side. Ginger suggests that the two could play another game, which distracts him. Ginger takes this opportunity to tag the beast properly.

Ginger runs deep into the woods and finds Pat. Ginger tries to explain the current situation, but he doesn't believe her. Ginger hears a beast growling, and the two siblings try to find a place to hide. The kids meet an animal that looks like a hybrid of a dog and a squirrel, and it tells them that they can hide in the Hiding Cave. They enter the cave, but they soon discover it is full of insects. The kids hear beasts approaching, so they stay in the cave. One of the beasts asks the squirrel-dog if it has seen any humans later. He answers negatively, saying that the humans went the opposite way. The beasts follow the squirrel-dog's directions, allowing Ginger and Pat to leave the Hiding Cave. As the sun begins to set behind the Gulla Willow, the siblings make their way to the tree. Spork appears suddenly and tags Ginger. She argues that the game already ended, but Spork says that — because Fleg didn't announce that the game was over — the tag counts.

Fleg calls an end to the game, and the two siblings are taken to a small clearing. There, they find the rest of the beasts making a big fire. While they prepare to cook Ginger and Pat, Nat appears. He was able to escape the Penalty Cage and has come save his siblings. Sadly, he is caught by two beasts. When Fleg sees Pat and Nat together, he is surprised. He says that the kids did a "Classic Clone". Since only "Level Three" players can perform this move, Fleg assumes that the boys must be at this level. Fleg explains that the kids had been competing against Level One players, which isn't allowed. Fleg apologizes for making the kids play the game, and he lets them go. Fleg even gives the kids directions back to their campsite.

The kids follow Fleg's directions, but they are surprised by a beast. Ginger says that the beast can't tag them since they are Level Three, but the beast reveals that he is also Level Three and tags Ginger. 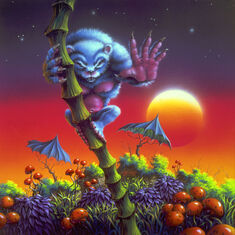 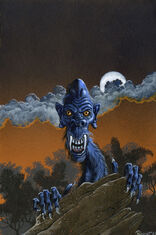 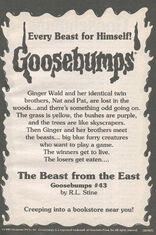 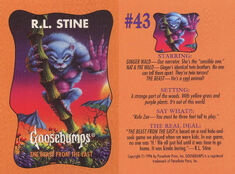 Trading card (front and back) also from Egg Monsters from Mars. 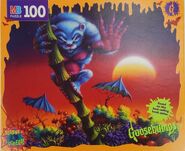 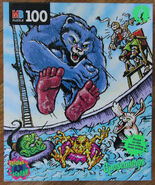 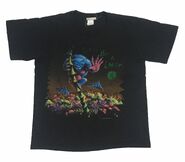