The Horror at Camp Jellyjam
The Barking Ghost is the thirty-second book in the original Goosebumps book series. It was first published in 1995.

The cover illustration features a ghostly dog growling at a nightfall with red eyes.

IT'S A DOG-GONE NIGHTMARE!

Scared of his own shadow. That's what everyone says about Cooper Holmes. But when the Holmeses move into a new house deep in the woods, scary things really do start happening. Problem is, no one believes a scaredy-cat like Cooper. But then no one else heard the bone-chilling barking late at night. Or ran into two evil-looking dogs who disappeared into thin air...

Cooper Holmes and his family have just moved from Boston to a new home within the woods of Maine. Cooper is easy to scare, so his obnoxious brother, Mickey, takes pleasure in pulling cruel pranks. The first night after the family moves in, Mickey hides under Cooper's bed in an attempt to scare him. After sending his brother out, Cooper is kept up by frightening sounds outside. The one that catches his attention the most is the sound of a dog barking. This is odd because there isn't another house for miles, and he hasn't seen a single dog in the forests. Cooper believes it could be another trick by his brother, but when he hears that there is actually two dogs barking, he begins to think otherwise.

The next morning, Cooper investigates outside for any signs of the dogs, but finds nothing. Not even paw prints are to be seen. While investigating, Cooper runs into a strange girl named Margaret Ferguson. She introduces herself as "Fergie" and says she is one of Cooper's neighbors. She tells Cooper he needs to move far away from the woods, as both the woods, and his house are haunted. Unexpectedly, Margaret becomes incredibly frightened. She begins screaming about dogs, and she runs away. Cooper runs after her, hoping to obtain some answers. When he finds her, Margaret acts as though she has no recollection of the event. Cooper goes home to warn his parents, but, on the way there, he is chased down by two large, ghostly, black labradors. He tells his father, but his father is skeptical, as none of the neighbors own dogs.

Later that night, Cooper wakes up to the sound of barking and finds a bag of potato chips torn to shreds on the floor. The following morning, Margaret knocks on Cooper's door and says she needs to talk to him. Margaret reveals her warning was only a joke, made up by Mickey in attempt to scare Cooper. She apologizes, but Cooper tells her that he saw two dogs in the woods. Margaret believes him, and she admits that she's scared of dogs.

To get back at Mickey, Cooper and Fergie formulate a plan for revenge. Margaret tells Cooper that the rest of her family will be traveling to Vermont, so she can stay at his house for a few days. The two attempt to prank Mickey by placing a fake rat on his pillow, but Mickey emerges from the closet, saying he knew they were planning to prank him, as he had been spying on them all day.

Cooper spots the dogs outside, so he and Marget go outside to investigate. The two friends eventually find the dogs, who seem to want to show them something. They follow the dogs, who eventually vanish through the walls of a large shack in the woods. Cooper and Margaret realize that the dogs are actually ghosts. They enter the shack, and the dogs begin speaking in human voices. The dogs reveal that they were once human, and they have been searching for a way to revert to human form. The dogs are able to swap bodies with Margaret and Cooper. As a result, Margaret and Cooper's minds are swapped into the dog bodies.

The two friends, now dogs, try to hunt down their impostors, who have made their way into Cooper's home. Cooper breaks into his house to warn his parents, but his voice only comes out as barking. His mother panics, as she is allergic to dogs. They attempt to drive the dogs out, but the two come back to the house. Cooper tries everything to get his family to realize its him, but nothing works. Cooper's mother says they may need to call animal control to put the dogs down. The two come to an agreement; the only way to get back to their normal selves is to drag their impostors back to the same shack that they originally swapped bodies in.

They are able to do so, and they manage to trap the fake Margaret and Cooper in the shack. The body swap works. However, Cooper and Margaret discover that they accidentally swapped bodies with a pair of chipmunks instead. Margaret asks Cooper what they should do next, and Cooper suggests that they should hunt for acorns, as he is hungry.

The Barking Ghost was adapted into an episode of the Goosebumps TV series. It is the seventh episode of season three, and the fifty-first episode overall. 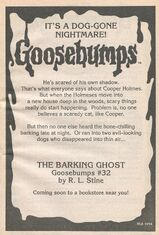 Book advertisement from Night of the Living Dummy II. 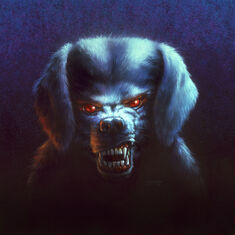 Some versions of the original print included a "free terrifying tattoo" tear-out. Other versions included a "summer 1995 calendar" pull-out poster. 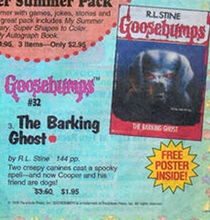 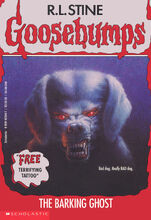