In Say Cheese and Die!, Terry has just taken up a new job at the Dairy Freeze, a frozen treat restaurant. After Greg finds a mysterious camera in the old Coffman House, the pictures he takes all come out strange, including his latest picture of his dad's new Ford Taurus being destroyed. After a drive in the car doesn't lead to the fatal outcome Greg fears, he takes a picture of Terry. Terry makes a goofy expression before the photo is taken, but when the picture emerges, it's of Terry outside with a frightened expression on his face. The next day, after another picture comes true involving Doug "Bird" Arthur, Terry arrives at the park with the same frightened expression from the photo to tell Greg that their father got in a car accident.

In Say Cheese and Die — Again!, Terry has changed jobs, now working at Kramer's Photo Mart. Greg once again steals the camera from the remains of the Coffman House, and after a series of mishaps, he begins to rapidly gain weight while Shari Walker begins to lose weight. After their attempts to remedy their ailments fail, they decide to take the photos to Terry so that he can reverse the photos from negative to positive. He does so and it manages to negate the effects of the camera.

Terry appears to have a very laid back and fun attitude to him, the best example being the face he makes when Greg takes his picture. Despite this, it seems like he has a hard time keeping a job as between the events of both stories, he loses his Dairy Freeze job and works at Kramer's. He also seems to get along very well with Greg and his parents. The original story also hints that Shari has a crush on him.

Terry looks a lot like Greg only four years older. He has blond hair, green eyes and a goofy smile. 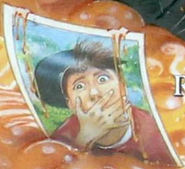 Terry as depicted on the UK cover of Say Cheese and Die!.
Community content is available under CC-BY-SA unless otherwise noted.
Advertisement