Terror in the Graveyard is a board game by Milton Bradley. It was released in 1995. The game is played by rolling the dice and moving forward.

You play as either Evan Ross, Andy, Gabe Sabry, Sari Hassad, Lizzy Morris, Luke Morris, Jerry Sadler, or Terri Sadler. You must collect ring cards, and avoid bottomless pits and being turned into monsters by creatures like Slappy the Dummy. The object of the game is to escape from the graveyard, and the only way to do that is to defeat the Headless Ghost.

This game must be assembled inside the game box. Once constructed, it presents a graveyard, with movement spaces, hedges that cannot be crossed, moving tombs, and a crypt containing a headless ghost. The ghost must be defeated in order to win.

Each player has two character pawns--only one of which they may chose to move on each turn. They move as far as is permitted by the amount shown on their die roll. Also on each turn, the tomb die is rolled, and one of the tombs is moved. This tomb movement alters the playing field by changing what some of the spaces on the game board represent. In this way, a player might land on a square that is safe, but after a tomb is shifted--they suddenly find that they are left "paralyzed with fear."

There is complete freedom of movement, except as stated above, and players cannot cross their own path. One of the special spaces is a "Goosebumps" space. On this space, the player draws a Goosebumps card. Some cards require players to perform an action straight away, others allow players to play now or later. One card allows play at any time.

During the game, players attempt to foil each other by picking up cards that allow them to turn other players into monsters, move other players onto bad spaces, steal each other's cards, etc. After a player has been turned into a monster, they can only be cured by landing on a "magic potion" square. If you are unfortunate, you can also fall into one of the open tombs--that character of yours is then stuck there until the end of the game. Characters can fall into tombs only by the movement of the tomb--In other words, they cannot be moved directly into a tomb.

Once a player reaches the crypt, they may attempt to defeat the headless ghost. In order to do so, they first must have picked up a ring card. At the crypt, the player drops the skull down the chute--if it falls the right way, then the headless ghosts springs into the air and the player wins. If not, they can attempt to defeat the ghost on their next turn.

All artwork by Rick Grayson. 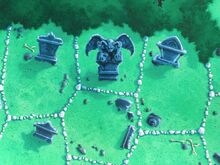 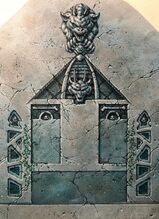 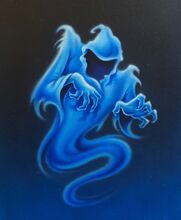 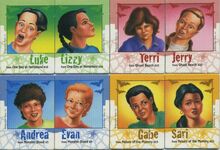 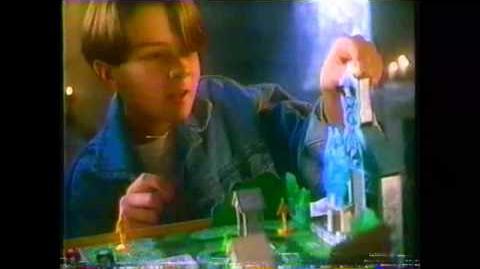 Retrieved from "https://goosebumps.fandom.com/wiki/Terror_in_the_Graveyard?oldid=106110"
Community content is available under CC-BY-SA unless otherwise noted.