Four of the ten short stories in the book were adapted for television. Those stories being "The House of No Return", "Teacher's Pet", "Strained Peas", and "Click".

READER BEWARE -- YOU'RE IN FOR TEN SCARES!

From an evil baby sister, to a remote control that can control more than just the television set, to a teacher who's obsessed with snakes, to a cute, cuddly, teddy bear gone bad, here are ten creepy, spooky stores guaranteed to give you Goosebumps all night long! 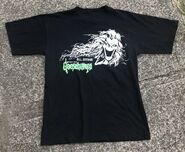 Skateboard.
Add a photo to this gallery

Ad from Scholastic Arrow book orders.
Add a photo to this gallery

Retrieved from "https://goosebumps.fandom.com/wiki/Tales_to_Give_You_Goosebumps_(book)?oldid=151302"
Community content is available under CC-BY-SA unless otherwise noted.