Blue
Blue and brown (book only)

Black
Red (book only)
Sybil Wicked is one of the main antagonists that the reader can encounter in the twelfth Give Yourself Goosebumps book, Welcome to the Wicked Wax Museum.

According to her servant Axel, Sybil Wicked was in a fire three years prior to when the book takes place. While everyone assumed Sybil died in the fire, she had actually survived, but her face was horribly disfigured. Sybil went into hiding so that she could spend all of her time trying to repair her face. Sybil steals the faces of others to aid her in her experiments.

In one ending, it is revealed that Sybil Wicked was never human. She was a wax figure created by Dr. Izzy Wicked. Sybil was the doctor's best creation until her disfigurement. In this same ending, Sybil gets too close to a Suction Screen, and her patchwork face comes off. If the reader doesn't have a mirror on them, Sybil steals their face. If the reader does have a mirror, Sybil will see her own hideous reflection and melt.

Sybil Wicked appears in issue 3 of Download and Die!, the second arc in the Goosebumps comic series. While concept art depicts her as almost human-like, she is a monochromatic yellow hologram in the actual story.

Sybil is accidentally summoned by an evil clone of Mitra Salar using an application on the cursed phone. Sybil manifests and is immediately obsessed with retrieving new skin for herself. When the real Mitra destroys the phone to prevent Slappy and Curly from using it for evil, Sybil and Fake Mitra both disperse.

Sybil Wicked has the appearance of a person in their late teens. Since her face was disfigured in a fire, Sybil covers what remains of her actual face with pieces of wax and human skin.

When Sybil's mask is on, she has a tuft of red hair just above her forehead and her eyes appear mismatched; one eye is small and blue, and the other eye is large and brown, and is higher on her face than the other. When Sybil's fake face falls away, it is revealed that her actual face looks like a purple, gooey nest filled with bugs.

The book's cover, however, gives Sybil a different appearance with long black hair, both of her eyes being blue and similar in size, and purple skin. She also wears a black dress and has sharp red fingernails.

In Download and Die!, Sybil resembles a combination of her previous appearances. Her mask is made of multiple pieces of human skin in varying colors just like in her original book appearance, and she has the long black hair, evenly-sized blue eyes, and sharp red fingernails from the book's cover. She wears a dark gray dress and red flats.

In the actual comic, she is portrayed as a ghostly yellow hologram. Because of this, the exact color of her hair and eyes can only be identified in concept art for Download and Die!. 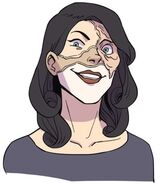 Concept art of Sybil for Download and Die!.
Community content is available under CC-BY-SA unless otherwise noted.