The other Swamp Monsters

The Swamp Monster was the main antagonist in the forty-sixth Goosebumps book, How to Kill a Monster, and its television adaptation.

The Swamp Monster is a creature that lives in the swamps of Georgia. It is a green-furred creature with the head of an alligator and a gorilla-like body. It had invaded the house of Gretchen and Clark's grandparents, causing them to lock it up in a hidden room.

Gretchen and Clark find the Swamp Monster in a hidden room. The Swamp Monster is concentrating on eating pancakes and doesn't notice Gretchen in the room. She turns to leave and he spies her. Dropping the pancakes on the ground, he trounces after her. Gretchen narrowly escapes the locked room only to encounter Clark in the hall. The Swamp Monster escapes out into the hallway in pursuit of the children. The children run away in fear, dragging their dog Charley with them, who keeps trying to turn around and confront the monster. They make it down to the second floor and lock Charley in a bathroom to keep him safe. The children attempt to get their grandparents' attention, but can't seem to find them in the castle.

The Swamp monster proceeds to make it down the floors of the castle as Gretchen and Clark find letters that give them info on how to kill the Swamp Monster. Gretchen has a plan. The stairwell to the third floor is missing some planks as the children run up the stairs and then jump onto the banister, the Swamp monster will keep running and fall three stories down to the ground floor of the castle. The Swamp monster survived that attempt.

For the second attempt, Gretchen pours drain cleaner, rat poison, ammonia, and turpentine into the pie. As the monster makes its way to the kitchen, Gretchen throws some orange paint and mothballs into the pie for good measure. The two children hide under the kitchen table as the large Swamp Monster makes his way around the kitchen, sniffing at appliances. The Swamp Monster rips the oven door off and throws it across the kitchen. He retrieves the non-poisoned pies from the oven and shoves them whole into his mouth, then turns around and polishes off the third, adulterated pie. The two children huddle in fear as the Swamp Monster stands inches from them, licking the pie plate. Then the Swamp Monster's eyes pop out of its head and it falls to the floor, dead. Gretchen does not want to get too close but it looks like the monster isn't breathing.

The second letter that Gretchen reads state that the Swamp Monster had many brothers and sisters and that they come out at night.

In the TV adaption of the book, the Swamp Monster (performed by Tim Rykert) had a different appearance. Gretchen figures out that the monster is allergic to humans when Clark accidentally sneezes on the monster because of his own allergies.

The Swamp Monster appears as a background monster in the Goosebumps film, performed by Nate Andrade (who is credited as "Monster #1"). He is one of Slappy's monster and villain henchmen and is referred to as the "Bog Monster" during the Comic Con appearance.

In the original book, the Swamp Monster is described as a furry creature with an alligator-like head and a gorilla-like body. The French cover of the book showed it to have pointy ears.

In the episode it was based on, it is depicted as man-sized humanoid hybrid of a chicken and a dinosaur.

In the Goosebumps film, the Bog Monster looks like a giant creature made entirely out of moss. 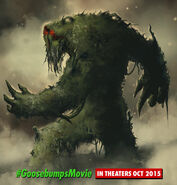 Concept art of the Bog Monster from Goosebumps.

Artwork by Rod Hunt for Where's the Creature game.
Add a photo to this gallery

The Swamp Monster as depicted on the French cover of How to Kill a Monster. 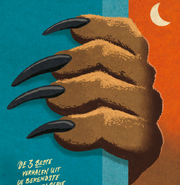 The Swamp Monster's hand as depicted on the Dutch cover of How to Kill a Monster.
Add a photo to this gallery

The Bog Monster from Goosebumps.

The Bog Monster walking with a Pumpkin Head, Murder the Clown, a Scarecrow, the Snake Lady, and some Graveyard Ghouls. 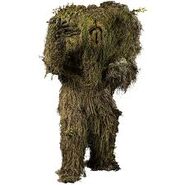 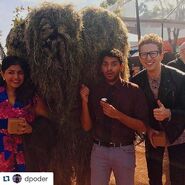 Add a photo to this gallery
Retrieved from "https://goosebumps.fandom.com/wiki/Swamp_Monster?oldid=152125"
Community content is available under CC-BY-SA unless otherwise noted.