Goosebumps Wiki
Register
Don't have an account?
Sign In
Advertisement
in: Tales to Give You Goosebumps (characters), Villainesses, Human Villains,
and 7 more

Red
Susie Snowflake is the antagonist of "A Holly Jolly Holiday", the fourth short story in More & More & More Tales to Give You Goosebumps. She is the protagonist of the holiday special of the same name.

In the special, Susie goes around spreading holiday cheer wherever she goes, giving homemade cookies to children. At one point, she hugs a grumpy neighbor to cheer him up. Not much else about the special's plot is known, although Beth mentions a scene where Susie dances with Santa.

When a girl named Jodie bought a tape of the special from The Christmas Shoppe, she and her family started to transform into Susie as they watched the top, gaining similar red hair and having her sickeningly sweet mannerisms. Jody's sister Beth was able to reverse the curse by burning the tape before she herself fully turned into Susie.

She is incredibly cheerful, and spreads joy wherever she goes. She encourages people to say "Pretty-bitty please with Christmas trees" to get what they want.

She is only described as having shoulder length red hair, that flips up at the ends. In Goosebumps HorrorTown, her hair is pinkish red with small pigtails tied side to side and two green bows while her eyes are green. 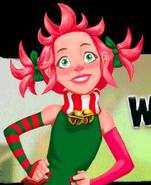