He is a friend to Carly Beth Caldwell, but takes advantage of her easy-to-scare nature by playing constant cruel jokes on her alongside his best friend Chuck Greene.

To get revenge on Steve, Carly Beth buys a terrifying mask from a party store in hopes to scare him. Her plan works, and he and Chuck run off, terrified, into the night.

Steve returns as the central character in The Haunted Mask II. Still up to his old tricks, Steve releases a squirrel into the girl's locker room, leaving him forced to coach a first grade soccer team as punishment. Steve hates the kids, as they constantly torment him.

He formulates a plan to pay them back. Thinking back to the previous Halloween night, Steve remembers the mask Carly Beth wore, and decides he needs one just like it to scare the first graders. Despite Carly Beth's warnings, he goes into the now abandoned party store and steals a mask resembling an old man.

The mask ends up stuck to his face, and Steve finds himself becoming weak and old. However, with the help of Carly Beth, he is able to remove it.

Steve is a prankster, and mainly loves playing tricks on Carly Beth. Despite this, she still considers him a friend. When Carly Beth gets her payback using her mask, Steve quickly becomes the one who’s afraid.

The following Halloween, Steve still yearns to play tricks, but is losing his edge on being a prankster, causing him to become more cynical and depressed over the idea that he would become too old to go trick or treating. He seems more bitter and resentful towards Carly Beth, due to her being no longer fazed by his pranks anymore. 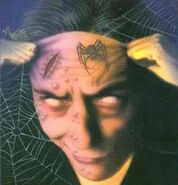 Steve wearing the Old Man Mask as depicted on the first printing of the French cover of The Haunted Mask II.

Steve as depicted on the second printing of the French cover of The Haunted Mask II.
Add a photo to this gallery

Retrieved from "https://goosebumps.fandom.com/wiki/Steve_Boswell?oldid=135610"
Community content is available under CC-BY-SA unless otherwise noted.