Andreanne Benidir
Stephanie Alpert is the secondary protagonist in the thirty-seventh Goosebumps book, The Headless Ghost, and its television adaptation.

On Halloween, Stephanie was putting on her cat-like costume while her best friend, Duane Comack, waited outside her house. Then Stephanie tricked Duane by pretending to attack him. Duane was really impressed at Stephanie's costume and then Stephanie scared a group of trick-or-treaters, who ran off and dropped their candy in the process. Stephanie and Duane thought that was more fun than trick-or-treating, so they spent the night scaring everyone else. Duane thought that was fun and Stephanie told her friend that they should do it every night, as it doesn't have to be Halloween to scare kids.

Stephanie was really into scary things such as Hill House and she really enjoyed being one of the Twin Terrors and scaring everyone else in Wheeler Falls and she was really proud that she made everyone else scared. She also enjoyed taking the tours at Hill House and she knew Otto's every word and move since she took the tour many times and Stephanie really believed the stories, which is why she and Duane took the tour often.

Stephanie is more of a thrill-seeker than Duane and she comes up with an idea to make things even more fun. And once Stephanie has an idea, there is no stopping her. Stephanie is also pretty mischievous as she can't even resist playing tricks on Duane. There are moments though, when Stephanie got really scared herself such as when they got lost in Hill House, but then again, she would act like she enjoyed it. Stephanie is really good friends with Duane as they have a lot in common.

After the encounter with The Headless Ghost, she and Duane give up the scary stuff and have found other things to be interested in.

Stephanie is twelve years old, Caucasian, tall and thin with brown hair and brown eyes. She is a few inches taller than Duane because she has higher hair.

Stephanie as depicted on the Dutch cover of The Headless Ghost.

Stephanie as depicted on the Korean cover of The Headless Ghost. 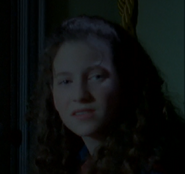