Something's waiting in the dark....

Monster Blood
Stay Out of the Basement is the second book in the original Goosebumps book series. It was first published in 1992. The book follows Margaret and Casey Brewer, whose father has been acting very strange since losing his job as a botanist at a nearby university. When Mrs. Brewer goes out of town, his obsession with his plants gets out of hand.

The cover illustration depicts a plant-like hand emerging from behind a door.

The 2003 reprint's cover illustration depicts Dr. Brewer's clone in front of a lab table holding a beaker in his hand.

Dr. Brewer is doing a little plant-testing in his basement. Nothing to worry about. Harmless, really. But Margaret and Casey Brewer are worried about their father. Especially when they...meet...some of the plants he is growing down there. Then they notice that their father is developing plantlike tendencies. In fact, he is becoming distinctly weedy--and seedy. Is it just part of their father's "harmless" experiment? Or has the basement turned into another little shop of horrors?

Margaret and Casey Brewer are playing Frisbee outside. They invite their father, Dr. Brewer, to play with them, but he declines their invitation, as he has work to do in the basement. Formerly, Dr. Brewer was a specialized botanist, but he was recently fired from his workplace. Now, Dr. Brewer does experiments in his basement. When Margaret and Casey try to go down to the basement to see his works, their father, whose hand is bleeding, warns them not to enter.

Some time later, Mrs. Brewer is forced to travel to Tucson to visit her sister Eleanor, who has been hospitalized. Dr. Brewer takes Mrs. Brewer to the airport, giving Margaret, Casey, and their friend, Diane an opportunity to go down into the basement and investigate Dr. Brewer's strange experiments. Upon entering, they find a wide variety of gigantic green plants, some of which seem to be bearing fruits.

Due to the intense humidity of the basement, Casey takes off his shirt and sets it down. The three kids begin to hear a breathing sound coming from several plants. The plants seem to be beckoning the kids with their tendrils. The kids decide they've seen enough and leave the basement at roughly the same time Dr. Brewer returns home. Suddenly, Casey remembers that he forgot his shirt and goes back to the basement to find it, only to hear the plants' breathing and groans. Casey is grabbed at the waist by two long plants tendrils. Margaret comes down to help him and manages to free him, but, while they are walking up the stairs of the basement, they find their father looking down at them.

Calmly, Dr. Brewer sits his children in the kitchen and tells them that one day he will explain everything that is happening, but — until that day — they are forbidden from entering the basement. Later, Margaret discovers that her father has begun placing a lock on the basement door. On Saturday afternoon, Mrs. Brewer calls Margaret by telephone. She informs Margaret that she must stay in Tucson for a few more days because Eleanor's operation did not go as expected. Taking advantage of this moment, Margaret tells her mother about the strange plants experiments in the basement. Margaret informs Mrs. Brewer that Dr. Brewer is now wearing a cap all the time.

After hanging up the phone, Margaret goes to the kitchen and watches her father eating something from a plastic bag. When he leaves, she discovers that he was eating plant food! Margaret tells Casey what happened, but he refuse to believe her. A few days later, the kids are playing Frisbee again, and Dr. Brewer is outside with them. The kids accidentally hit Dr. Brewer on the head. This knocks off his hat, revealing green leaves growing on his head. Dr. Brewer sits down with his children again and explains that the leaves are only a side effect of his experiments. Dr. Brewer goes to the basement again quickly.

That night, Margaret spies her father in the bathroom, watching as he removes the bandage from his hand, revealing bright green blood instead of red blood. She panics and runs back to her room. Eventually, she goes down to the kitchen to have a glass of water. Margaret finds Casey, who also couldn't sleep. Both kids listen again to the plants' noises in the basement. Before returning to her room, Margaret takes a small look at her father's room, discovering moist dirt and worms in his bed.

The next morning, Margaret tells Casey what happened. Immediately, Dr. Brewer appears and tells them that he has prepared lunch for them: mashed green potatoes. He insists that they eat it. Fortunately, Mr. Martinez, Dr. Brewer's former boss, visits the house to discuss Dr. Brewer's experiments. While their father is distracted, the kids throw their meal in the trash and say they have already eaten it.

The next morning, Dr. Brewer leaves the house to help his neighbor to install a bathroom sink. The kids decide that this is another opportunity to enter the basement. As soon their father leaves, they remove the lock and enter. In the basement, they find Mr. Martinez's suit hidden near a table and realize that he never left the house after his visit yesterday. After a few minutes, the kids hear footsteps in the house and realize that their father has returned, so they flee from the basement through a small window that faces the backyard. However, they're discovered by Dr. Brewer. He tells them that Mr. Martinez took off his suit due the basement's tropical climate and forgot it there. Before returning to his neighbor's house to continue with the sink, Dr. Brewer again warns Margaret and Casey not to got back down to the basement.

The following morning, Mrs. Brewer returns from Tucson, so Dr. Brewer must leave the house to pick her up from the airport. Margaret and Diane go out for a bike ride. When they return, Casey tells them he wants to fly kites, but the kites are in the basement. The kids decide to return to the basement so they can look for the kites. Shockingly, they find the rest of Mr. Martinez's clothes, realizing that their father had lied to them.

The kids hear noises coming from a supply closet. When they open it, they find Dr. Brewer bound and gagged with plants tendrils. They untie him, and Dr. Brewer tells them that the one who went to the airport to pick up his mother is not him. Instead, it is a hybrid plant clone created during his experiments. Dr. Brewer grabs an axe and waits for his clone to return.

Dr. Brewer's clone appears on the basement stairs. He tries to trick the kids into believing that their real father is the clone. However, when Margaret hears her father call her "Princess" (which the clone never did), she gets an idea; grabbing a knife, she makes a small cut to her father's hand, revealing red blood. The real Dr. Brewer uses the axe and cuts his clone in half, revealing bright green blood and a stem-like interior. The kids hear more noises in the supply closet. Inside, they find Mr. Martinez gagged, so they release him.

One week later, Dr. Brewer burns all the mutant plants in the yard, planting a few into the garden. He tells Margaret and Casey that he will stop doing experiments permanently. The kids are walking back inside when a small flower on the ground brushes against Margaret's ankle. When she bends down to look at it, the flower whispers to her "Margaret, help me! I'm your real father!". 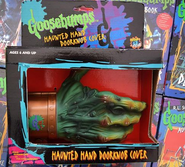 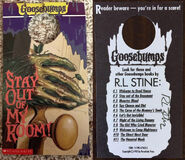 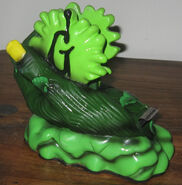 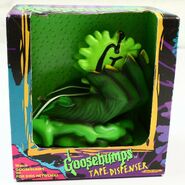 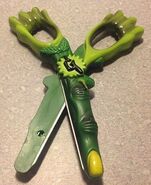 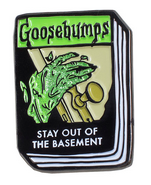 Stay Out of the Basement was adapted into a two-part episode of the Goosebumps TV series. It is the eleventh (part one) and twelfth (part two) episode of season one. 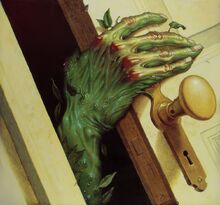 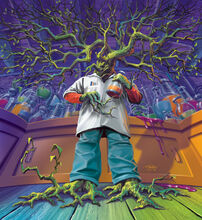 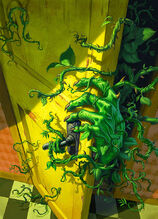