Orange/Yellow
Sparkles the Dragon is a sentient dragon that first appeared in the twentieth book in the Goosebumps Series 2000 series, Be Afraid — Be Very Afraid!

The next day, Connor's friends insist on continuing the game, despite his objections. Emily draws the cards needed to become a dragon. Kyle teams up with Emily, and they capture Connor's character, intending to finish him off. The kids then hear a roar. When they check outside, they see a massive dragon, rampaging throughout their neighborhood. Connor ends up sliding all the dragon's cards back into the box, which ends up defeating the dragon.

His defeat in the book resulted when Conner slipped his card as well as all the other cards back into the packet box, causing him to suddenly disappear. 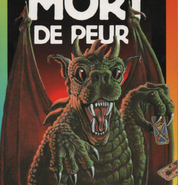 Sparkles as depicted on the French cover of Be Afraid — Be Very Afraid!. 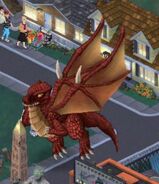 Sparkles as he appears in Goosebumps HorrorTown. 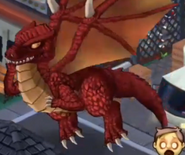 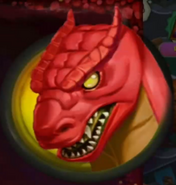