Attack of the Jack!
Slappy Birthday to You is the first book in the Goosebumps SlappyWorld book series, and the ninth book in the Living Dummy saga. It was published in 2017.

The cover illustration depicts Slappy viciously emerging from a wrapped birthday present with an evil smirk on his face.

It is bad enough Ian Barker has to spend his twelfth birthday with his younger sister, Molly, and their two annoying cousins, Vinny and Jonny. The four of them can't ever hang out without getting themselves into trouble. And Vinny and Jonny always want to play with Ian's stuff, always taking turns and breaking everything that they touch. Even Ian's new birthday presents are up for grabs. But when Ian gets Slappy from his dad, things go from bad to worse. Because when Slappy is in charge, you don't fight over him, he fights over you!

Ian and his sister Molly start their morning by eating blueberry pancakes for breakfast, they fight over the last piece, then Ian goes to the basement, where Mr. Barker is repairing a doll, he has a doll hospital, and he's working on hundreds of dolls. There are loud knocks on the door, Ian answers it, only to get punched by Jonny, one of his cousins, his excuse was he kept on knocking when Ian answered the door, he and his brother Vinny eat some of Ian's cupcakes, and later go upstairs to play PlayStation video games, the children get in a fight because the two boys were cheating, so Mrs. Barker tells Ian it's time to open presents, only to break up the fight. Ian's first present is a remote-controlled Star Wars BB-8 figure, that Vinny and Jonny "tested." Then, Ian got Slappy, and he automatically loved him, because he always wanted a ventriloquist dummy. Mr. Barker said it belonged to someone and he asked him to repair it, but he never came back for it. A year passed, so he decided to give the dummy to Ian. Thinking Molly would feel left out, he gives her a 1930s Pasty Doll, which she names Abigail.

Slappy interrupts the story to explain why Ian always wanted a dummy.

Three years ago on Ian's ninth Birthday, Mr. Barker takes him to a doll museum, owned by a creepy guy named Mr. Klausmann, who wears a baby doll mask because he claims that his face is so ugly that people will get nightmares. He shows him a ventriloquist dummy room, and Ian is fascinated with them all and plays with two of them, Farmer Joe, and Mr. Fancypants, then all the sudden, everyone disappears, and the dummies begin laughing on their own. Ian runs into a woman in a black blouse. He asks her where Dr. Klausmann went, but she says a person by that name doesn't work there. Ian finds his dad, who tells him that the events were just a prank. Ian thought it was scary but clever, and that's why Ian always wanted a ventriloquist dummy.

Back to the present day, Jonny and Vinny play with Slappy, and they break his hand, so Mr. Barker fixes him, and the boys go watch a horror film on Netflix. Ian's Uncle Donny tells the kids that they're going to have a family talent show, and Ian begins practicing his act. Later that day, Molly discovers that Slappy has his own Wikipedia page, and the article talks about the curse that brings him to life, Jonny finds the spell, Karru Marri Odonna Loma Molonu Karrano, and reads it out loud, but Slappy doesn't come to life, yet. When Ian goes to bed, he dreams that Jonny and Vinny were dummies and they slap each other.

The next day, Abigail is found with her head broken. Molly accuses Ian of doing it, and that's when Ian notices something odd about Slappy. At the talent show, Vinny and Jonny juggle duckpins, but one of the pins knocks Jonny out cold. Slappy begins laughing, and Ian's parents think he's making Slappy do that. Jonny's fine, but when Molly goes next, Abigail is missing. She finds the doll in the fish tank, and gets mad at Ian and pushes him in the fish tank. Ian shatters the glass, and Mrs. Barker cleans it up. Slappy made horrible nasty jokes on his own, making fun of the family. Mr. Barker decides to send Ian to his room, and Slappy begins cackling at Ian. That night, Slappy is nowhere to be found, and he assumes that he walked out of the house.

Slappy interrupts again and tells what Jonny and Vinny are up to.

That morning, it is revealed that Vinny and Jonny took Slappy to scare Ian. But then, Slappy comes to life, and starts punching and kicking the two boys. He then covers them in this green goo which he calls, "his nosebleed" and the goo burns the boys. Slappy wants them to take him back to the Barker house to get the spell so he'll stay alive forever. They go to the house, and Slappy begins vandalizing the garage. Mr. Barker sees the damage, and the two brothers are blamed for the damage.

Ian knows that Vinny and Jonny were telling the truth about Slappy, so they go to the doll hospital to get the spell, but Slappy snatches it first. Their dad witnesses Slappy tearing the sheet of paper to shreds. Mr. Barker holds Slappy down and Ian removes his head, but that doesn't stop him. Slappy rises up, and he brings all the broken dolls to life. The army of dolls begins to attack the kids, but then, Abigail comes to life and says the spell. Slappy's headless body drops down lifeless.

The kids cheer for their victory, and Mr. Barker apologizes to Ian for giving him Slappy for his birthday. But Abigail, still alive, commands her new slaves to go make her lunch.

R.L. Stine announced the title of the book in a comment on Twitter on July 18, 2016.[1] The cover was revealed a week and a half later. An eBay seller sold three uncorrected proof copies of Slappy Birthday to You in October 2016, four months before the book's official release.[2] 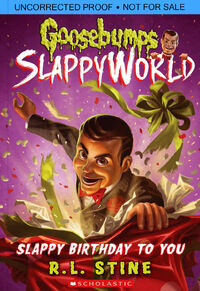