Goosebumps Wiki
Register
Don't have an account?
Sign In
Advertisement
in: Books, Night of the Living Dummy Books, Goosebumps Series 2000,
and 11 more

Earth Geeks Must Go!
Slappy's Nightmare is the twenty-third book in the Goosebumps Series 2000 book series, and the fifth book in the Living Dummy saga. It was published in 1999.

The cover illustration depicts Slappy lying in bed and screaming. His eyes are bloodshot as he pulls the covers closer in fear. His pillow and blanket are purple, and covered in pink sheep.

Jimmy O'James and Slappy perform their ventriloquist act in front of a crowd of children. Much like their previous acts, Slappy hurls harsh insults and threats at Jimmy as well as towards the children in the audience. After calling up a young boy named Freddy from the audience, Slappy bites the boy in the ear. As the kid and the audience panic, Slappy keeps his jaw clenched on the ear for a short while. Jimmy takes Slappy offstage as the dummy sings a screeching whistle.

Backstage, Jimmy hurls Slappy around the dressing room, telling the dummy that his days of working with him are now over. As Slappy laughs off Jimmy's threat, Jimmy tells Slappy that he managed to get a hold of a new dummy for his act. Jimmy shows Slappy a wooden box containing his new dummy. Jimmy opens the box to reveal two things: a old, yellowed stack of papers and a dummy identical to Slappy by the name of Wally. Jimmy tells Slappy that Wally was also created by the same evil toy maker that created Slappy. Jimmy also learned a spell that can wake Wally, while also putting Slappy in a permanent sleep. Slappy attacks Jimmy. The two fight each other, with Slappy managing to get the upper hand and choking Jimmy until a pair of girls named Georgia and Stella Boonshoft suddenly appear. Georgia tells Jimmy that she admires his ventriloquism and wants to be a ventriloquist herself, while Stella mocks Georgia, making rude comments about her weight.

Jimmy shoos the girls away, then gets the upper hand on Slappy. He begins to read the spell, but before he can finish, Slappy pleads with him, asking for a truce and not to put him back to sleep. Jimmy decides to give Slappy one last chance. If he can perform three good deeds within one week, he'll let him live. He warns Slappy that he'll be watching him. Jimmy then gives Slappy to Georgia as a gift, much to the annoyance of Stella. After taking Slappy home and playing with him, Georgia's mother gets angry at her over the state of her room. Slappy decides his first good deed should be to clean Georgia's room and does so as she sleeps. However, the next morning, he sees that the room is messy once again. Slappy and Georgia begin to suspect Stella, as there was fingerpaint on the walls. He warns her about the messy room but silences himself when Mrs. Boonshoft shows up.

The next morning, Mrs. Boonshoft tells Georgia to take Slappy and visit Maggie Kramer, a young girl who has been confined to a wheelchair after breaking her hip. Stella comes along as well. Georgia's jokes seem to go over well, but when she sets Slappy down to get the phone, suddenly Maggie's wheelchair begins to roll down the hill, through traffic, almost hitting traffic until it crashes into a curb, sending Maggie flying. Maggie gets a broken arm in the process. Slappy believes that Stella must have pushed Maggie in an attempt to sabotage all of his attempts at good deeds. So, he attempts to get rid of her once and for all.

That night, after taking a bad fall from atop Georgia's bookshelf, he sneaks into Stella's room, only for Stella to chop him up with an ax. Slappy wakes up, as that was just a dream, and resumes entering Stella's room. However, he ends up struck by a baseball bat wielded by Stella, who knows that Slappy is alive, but her family won't believe her. As the family argues over this, Slappy decides to change his plans.

The next night, Georgia takes Slappy across the street as she babysits a two-year-old boy named Robby. However, Robby is easily frightened by Slappy and is put to bed shortly after. Later that night, Slappy overhears Robby being strangled by the blanket wrapped around his neck and decides to untangle it. However, when Robby's parents get home, they panic as Robby is now tangled in the drapes. Once Slappy, Georgia, and Robby's parents see small footprints, not only does Slappy blame Stella, but so does Georgia and Mrs. Boonshoft. Slappy decides that enough is enough and decides to kill Stella. He enters her room to smother her, but Stella manages to take a picture of him moving. However, the picture ends up blurry, and when she tries to prove to her mother and Georgia that Slappy is alive, Slappy plays dead.

Believing Slappy to be the cause of Stella's recent string of cruelty, Mrs. Boonshoft tells Georgia to lock Slappy in the closet, but since Georgia is taking Slappy to school with her tomorrow, she tells her mother that she can't. At lunchtime the next day, Georgia performs with Slappy in the cafeteria to a mostly apathetic audience. Slappy suddenly notices what looks to be Stella's purple hat. However, when he confronts her, he discovers that it's not Stella, but Wally. Wally was the one sabotaging Slappy this entire time. The two dummies begin to fight all over the cafeteria in front of the frightened students and faculty. Georgia, now realizing Stella was telling the truth, grabs Slappy and Wally and throws the both of them into the trash compactor, destroying the two dummies.

Slappy suddenly wakes up back in the dressing room. The whole incident had been a nightmare. He's happy to be alive but still insults Jimmy when given the opportunity. Suddenly, a box is brought into the room containing Wally. Slappy panics, but Jimmy tells him that some nightmares do come true. Jimmy then quickly starts reading the curse. 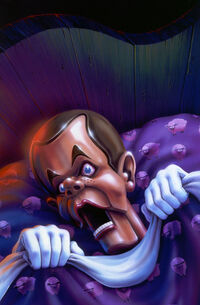