Shop Till You Drop...Dead! is the twenty-fifth book in the Give Yourself Goosebumps gamebook series. It was published in 1998, and is the first cover in the series to be illustrated by Craig White.

The cover artwork features a hairy purple monster carrying a bunch of shopping bags with the words "Mayfield's Bazaar" on them. The beast is riding down an escalator in a mall with black and white tiles.

You're sick of Reggie Mayfield’s tall tales. Especially the one about his dad’s department store. Reggie says monsters roam the store late at night. You bet Reggie is lying—so you agree to spend midnight at Mayfields.

Too bad for you Reggie is telling the truth!

Monsters do roam the store. Like the vampire night-guard. And the mannequin that comes to life. Watch out—he’s dressed to kill! Can you survive the midnight hour at Mayfield's?

Reggie Mayfield tells you that there are monsters in his father's department store. You and your friend, Julie, try to prove that Reggie is lying by going to the department store at midnight and spending an hour there. Unfortunately, it turns out that Reggie has been telling the truth. Your main choice in the book comes from reading a note Reggie left you, which tells you to go to a certain floor; but you can't read his handwriting, and have to decide whether he meant "Floor 1" or "Floor 7".

You decide that Reggie wanted you to go to Floor 7, so you and Julie take the elevator there. But when you reach Floor 7, the elevator starts to free-fall, forcing you to jump out; and then the whole building begins to shake. You and Julie think this is an earthquake, and try to escape down the stairs, but your path is blocked by a werewolf guarding the building. From here, your choices will bring you up against vampires, werewolves, gargoyles and/or living mannequins.

You think Reggie's note says Floor 1. On reaching Floor 1, you find a duffel bag and another note from Reggie, who instructs you to collect a different item from each floor of the store and then head to the seventh floor for "The Final Showdown." Subsequently, you take part in a scavenger hunt to collect the items; but have to survive the horrors in the store and must also do the hunt in the right order (as you need some items to survive certain floors.)

From Story A, during the "earthquake", you decide to take the elevator rather than the stairs even though you know the elevator is broken. You climb down an emergency ladder inside the elevator shaft but then see that there is a clockwork monkey there; and follow the monkey to a secret room, where you meet Reggie's aunt Dr. Sheila Mayfield, who is performing horrific experiments with animals. Surviving this storyline takes you to Story B.

There are twenty-three bad endings and four good endings. 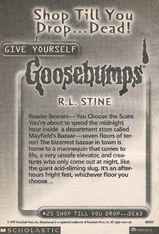 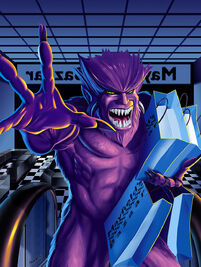 The following concept art was created by Mark Nagata before he was replaced by Craig White as the main illustrator of the series. 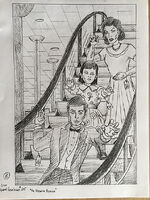 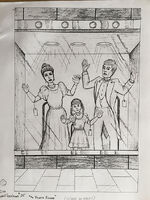 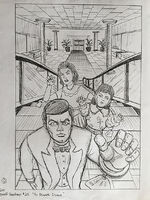 Retrieved from "https://goosebumps.fandom.com/wiki/Shop_Till_You_Drop...Dead!?oldid=126128"
Community content is available under CC-BY-SA unless otherwise noted.