Goosebumps Wiki
Register
Don't have an account?
Sign In
Advertisement
in: Books, Give Yourself Goosebumps, Animals,
and 9 more

Escape from Horror House
Ship of Ghouls is the thirty-sixth book in the Give Yourself Goosebumps gamebook series. It was published in 1999.

The cover illustration depicts a giant shark with red streaks near its jaws (possibly blood) in the foreground. Behind the shark is a sunken cruise ship, and debris littered on the ocean floor.

YOU CRUISE, YOU LOSE!

You're on a two-week cruise to Japan with a friend — and no parents! Par-ty! This should be a total blast — if you can survive the deadliest cruise ever. A man on board claims the ship is really a laboratory for evil experiments. Experiments that turn passengers into gross fish-creatures! Now the man is planning to blow up the ship! Should you warn the captain or hit the water?

If you stay on board, will you be turned into a giant shrimp? If you jump overboard will you be able to survive the killer sharks? The choice is yours in this scary GOOSEBUMPS adventure that's packed with over 20 super-spooky endings!

You and your friend, Glenn, take a two-week cruise to Japan. A fellow passenger says that people are doing experiments on the boat that are causing passengers to turn into fish-like creatures and he is therefore going to blow the ship up. You have to choose between telling the captain about the bomb threat and jumping off in order to get away from the explosion. If you and Glenn follow the passenger, you see the results of some of the experiments and have to defeat the one in charge of the operation. If the ship blows up, you meet a group of new friends and you all have to work together to survive.

You and Glenn meet up with a passenger who explains he will blow up the ship with everyone on it because passengers were being turned into gross fish creatures. He then explains that the cruise was run by someone named "The Boss", who is the one turning the passengers into the creatures. Two burly crewmen take him away and explains that they are taking him into a place called "The Room", where The Boss is working. The crewmen spot you and Glenn. You and Glenn split up and talk to a woman named Mrs Bass about the passenger's story. Another passenger named Mr Smith tells you not to tell the captain, but you do anyway. You and Glenn find more creatures on the way to The Room. When you and Glenn reach The Room, you meet Mrs. Bass and Mr. Smith. Mrs Bass tells you to spray a fire extinguisher in The Boss' eyes. However, you and Glenn have to choose wisely ...

The ship blows up and a lifeboat takes Glenn, while the other takes you. The people on the boat are four teenagers who were on the cruise. Their names were revealed to be Bob, Steve, Judy, and Hal. All the five of you have a little supply of food and water, but all of you can still survive the adventure. When you spot a far away island, Hal and Judy get thrown off of the boat. At the island, hostile strangers force you three to take the "test", which turns out to be dangerous. Steve betrays you and Bob, and you escape on a boat alone. However, you still have to go home, but you are exactly far away from "home".

There are nineteen bad endings, one ambiguous ending, and six good endings. 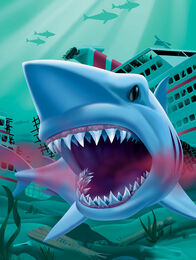