The Shadow Figure is the main antagonist of the tenth Goosebumps book, The Ghost Next Door, and its accompanying television adaptation.

He started following Hannah Fairchild around, whispering her name and pointing at her. He would often vanish when Danny Anderson appeared, making her believe that Danny was a ghost. He would also warn her to stay away.

Eventually, he revealed to Hannah that he is actually the ghost of Danny. Danny had gotten trapped in Mr. Chesney's house by a fire he helped start and Danny was destined to die in the fire, with Danny taking Shadow Danny's place in the Shadow Realm. When Hannah rescued Danny from the fire, he vanished forever.

In the TV episode, he has a more active role, teaching Hannah how to be a ghost. He also actively attempts to kill Danny, as he can't wait for him to die naturally.

In the episode, he is very manipulative as he teaches Hannah to be a ghost to distract her from saving Danny. He also lies to her by saying that Danny is destined to die, while he merely wants to replace him.

As a shadow, he is in all black with red eyes, and arms that are described as being as bony as twigs. When he reveals himself to be Danny's ghost, he has the same face, but with glowing red eyes his shadow self has. 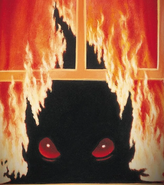 The Shadow Figure as depicted on the French cover of The Ghost Next Door. 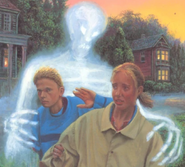 The Shadow Figure as depicted on the Dutch cover of The Ghost Next Door.

Add a photo to this gallery
Retrieved from "https://goosebumps.fandom.com/wiki/Shadow_Figure?oldid=137655"
Community content is available under CC-BY-SA unless otherwise noted.