Dan Warry-Smith (TV episode)
Seth Gold is the main protagonist in "Click" (the eighth short story in the book Tales to Give You Goosebumps), as well as its television adaptation.

Seth Gold loves channel surfing. One day, his dad brings home a universal remote. Seth is thrilled. Seth starts exploring by using the remote on different appliances in his house. He soon discovers that this remote not only worked on appliances, but on people, too, as he mutes his mom comes as yells at him for hogging the remote and not doing his chores. He continues to use the remote to his advantage, such as using the rewind function to eat the same dessert multiple times, or when he paused his class in order to cheat on his test. He continues to frivolously use the remote, but when Seth mutes a lunch lady, but he is unable to unmute her.

As students try to take the remote from him, he freezes one out of panic. The principal arrives at the scene, but he freezes her, too. He runs and other students start chasing him. Desperate, Seth presses the power button in hopes of everything going back to normal. Instead, he finds himself in a dark void. He looks at the remote and sees a blinking light, signalling a dead battery.

Unlike in the short story, Seth orders the remote (called the Verona XG-20 Universal Remote) from Armchair Electronics in the episode. Seth starts watching TV when his sister starts practicing her dance in front of him. Seth jokingly hits pause while pointing the remote at her, but she surprisingly freezes. Tony Hutchins, the spokesman of Armchair Electronics, appears on the TV screen, warning Seth that the remote isn't a toy.

Ignoring the warning, Seth continues to use the remote without real purpose, such as changing the colors of his fish, lowering the volume of his neighbor's lawn mower, speeding up and slowing down people, and even retaliating against the school bully by changing the channel on him. Seth shows his best friend Kevin the remote, who thinks it's cool until Seth uses it to cheat on a test. Kevin objects to Seth misusing its powers, but Seth doesn't heed his advice.

Seth continues to get warnings from Hutchins in several forms (email, mail, phone calls, TV screens), but he simply ignores them and persists in using the remote as he desires.

Later at home, Seth pauses his entire family for a moment of peace and quite after they kept nagging at him. However, he is unable to pause them. Seth calls his friend, Kevin. unable to contact Armchair Electronics, Seth decides to fix the remote himself and manages to un-pause his family. Kevin suggests that they should throw the remote away, as it is too dangerous. That night, Seth and Kevin throw the remote in a trashcan. However, as soon as Kevin leaves, Seth goes back to retrieve the remote.

The next day at school, after noticing that Seth still has the remote, Kevin tries to forcibly take it away from him, but Seth freezes him. The remote starts to malfunction again, and Seth presses random buttons, hoping that one would work against his friend. Finally, he pushes the power button and the world around Seth suddenly disappears, leaving him in an empty black void. Seth notices that remote ran out of batteries. He then sees Tony in the void with him and pleads for help from him. But the spokesman merely repeats that he warned him that the remote wasn't a toy and leaves the boy to his fate.

In the TV episode, Seth is chubby with short, curly, dark brown hair. He seems to be of average height.

In the short story, Seth feels powerful because he can control the TV with just one click from a distance. Seth is usually mean to his sister, which oftentimes results in his mother yelling at him. His stubborn and adamant attitude is more predominant in the TV adaptation, as he wouldn't heed Hutchin's warnings, nor would he listen to his best friend Kevin's advice. 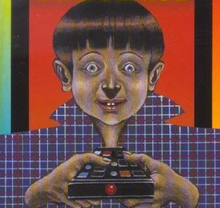 Seth as depicted on the French cover of "Click".