Brown
The Sea Monster is an aquatic creature in the Goosebumps book Deep Trouble.

Billy Deep ran into the sea monster while snorkeling. He tells his sister Sheena what he saw, but she didn't believe him. At the end of the story, Billy runs into the monster again while looking for the Mermaid.

It is a huge dark green monster with one brown eye, twelve octopus-like tentacles, and has two rows of sharp teeth.

In the concept art for the Goosebumps movie, the sea monster retains his dark green tone from the book, but is redesigned with four red eyes, no visible mouth, and eight octopus-like tentacles (much like an ordinary octopus).

Sea Monster as depicted on the British cover of Deep Trouble. 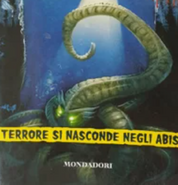 Sea Monster as depicted on the Italian cover of Deep Trouble.