The Mummy Walks
Scream School is the fifteenth book in the Goosebumps Series 2000 book series. It was published in 1999.

The cover illustration depicts a strange being with red hair sitting at a school desk in a classroom drawing a skull.

The King of Horror. That's what everyone calls Jake Banyon's father, Emory. For most kids, having a famous movie director as your father would be a dream come true. After all, it gives Jake the chance to interact with celebrities, and get into the movies for free. However, life with "The King of Horror" can be a real nightmare.

Emory is eccentric, and not at all fatherly. Above all things, Emory is obsessed with scaring Jake. As creator of the Scream School series of horror films, he is constantly dragging his son on set, hoping what Jake sees will terrify him. Emory claims he only scares Jake to teach him that fear is a natural emotion, one that should be embraced, rather than suppressed. Jake denies ever being scared. He loves horror, but his father never believes him. Tired of his father's antics, Jake decides the only way he can prove he's brave is to show he can be just as scary as his father.

One day, Emory offers Jake and his friend, Chelsea, a chance to be extras for a scene in his movie. The two children agree, and Emory proceeds to explain how the scene will play out. The film's star will be trapped in an art room closet, desperately trying to escape. While he does, over a dozen snakes will be set loose into the classroom, scaring off the children painting, and leaving the hero face-to-face with the hungry serpents. However, things don't go according to plan, as the film's star falls ill. Not letting this hinder the movie's progress, Emory chooses Jake to fill in for the star. Things soon go awry when a snake goes missing. In the closet, a terrified Jake starts to feel a snake moving across him. He bursts into the classroom, but quickly realizes it was only a power cord. The film crew starts to laugh, leaving Jake embarrassed, and more determined than ever to prove he can be brave.

Jake's dream fails to come to fruition when Emory humiliates him on his birthday. He has a group of hired actors lure Jake to an old soundstage, where they scare him to the point of tears, dressed as hideous ghouls. Jake's mother scolds Emory for being so cruel, and he tells her he simply wanted to see if Jake was as brave as he said.

Several days pass, and Emory reveals he's begun work on Scream School VI. He tells Jake he found an abandoned school in the middle of a desert. He thinks the school will be perfect for the movie, and that it is even rumored to be haunted. He invites Jake to come along, and he happily agrees.

When Jake arrives, he begins to explore the school. While walking through the cobweb filled halls, he comes across a girl by the name of Mindy. Mindy reveals she's another extra for the film, and begins to tell Jake the reason the school was abandoned. She says that the school was built on top of an old graveyard. This angered the dead, causing them to rise and wreak havoc in the school. One of Mindy's friends tells Jake he shouldn't believe her stories, but Jake begins to question if it could possibly be true.

When filming starts, things immediately start to go wrong. During a scene in the cafeteria, several extras find fingers and toes in their food. Emory tries his best to fix the situation, denying having anything to do with it. Things only get worse, as more incidents befall the filming. It seems as if the ghost stories are coming to life, and even Emory is beginning to grow scared.

During a final scene, Jake lures his father into one of the school's classrooms. Out of nowhere, ghouls emerge. They tell Emory they are the real deal, before lunging out to attack. Emory's panic is then brought to a halt by Jake. Jake reveals that he and the cast set everything up as one elaborate practical joke. This was his way of showing his father he was brave, as well as payback for humiliating him on his birthday. Proud, Emory congratulates Jake, and reveals he truly was terrified.

Reviewing the footage, Emory is horrified to find that none of the actors showed up on film, revealing they really were ghosts. Emory flees, now a believer in the paranormal. Jake then begins to laugh with Mindy. This was another one of his gags. With a smile, Jake declares himself the true King of Horror.

Italian (Il Re Dell'orrore - The King of Horror) 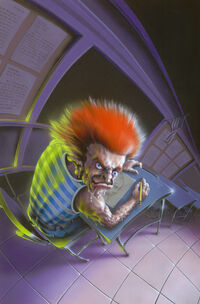