Goosebumps Wiki
Register
Don't have an account?
Sign In
Advertisement
in: Books, Give Yourself Goosebumps, Birthdays,
and 8 more

Into the Twister of Terror

Zombie School
Scary Birthday to You! is the thirty-ninth book in the Give Yourself Goosebumps gamebook series. It was published in 1999.

The cover illustration depicts a white birthday cake with blood-red icing. The blue candles on top are giving off a big blaze of fire. A section of the cake had been cut away, revealing that it was filled with all sorts of creepy crawlies, such as worms, a large spider, and other bugs. A brown-furred rat is seen gripping the sides of the cake.

IT'S YOUR PARTY, YOU CAN SCREAM IF YOU WANT TO!

Your parents have to work on your birthday, but don’t worry—they've hired some guy to create a special "horror birthday party" for you. Uhh... can you say "lame"? They must have forgotten you're turning twelve, not two!

But then Dr. MacDeath arrives and twists your friend into a live balloon animal! Now you have two choices: open your presents or play party games. If you open presents, you could be the proud owner of a vicious wolf! If you decide to play paintball, you end up dodging paint capsules—filled with acid!

Your parents have to go to work on your birthday. They hire a strange entertainer called Dr. MacDeath to throw you a horror-themed birthday party, but he soon proves himself to be evil, and turns one of your friends into a balloon animal. He nails shut all the doors in your house so you can't escape. After an interruption from someone at the door, he forces you to cut your birthday cake, which turns out to be crawling with bugs and worms. You must then decide whether to play party games or open presents.

You play party games, with a choice between Paintball, Dodgeball, Pin the Tail on the Donkey, or a Scavenger Hunt. You have to survive the games and find a way to beat Dr. MacDeath, but he's not exactly playing fair.

You decide to open presents. Your friends' presents have been enchanted by Dr. MacDeath, but he has a few surprises of his own for you.

In story B, you open a present Dr. MacDeath gave you, which contains two tickets to a horror-themed amusement park. You take your friend Josh with you and can have fun without MacDeath, but this just leads to two possible endings (one good, one bad.)

There are sixteen bad endings and six good endings. 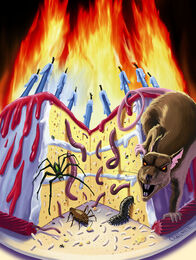