Smile for the camera...

The cover illustration depicts a photograph of a skeleton family having dinner.

Sourball. That's what Greg calls his English teacher, Mr. Saur. He's a real grouch. And now he just gave Greg a big fat "F" on his oral report. He didn't believe Greg's story. About the camera Greg found last summer. About the pictures it took. About the evil things that happened. Poor Greg. He just wanted to prove old Sourball wrong. But now that he's dug up the camera, bad things are happening. Really bad things. Just like the first time...

In the small town of Pitts Landing, Greg Banks is in his English class and is called upon by his English teacher, Mr. Saur, to give a report about what he did during the summer. Mr. Saur is a strict teacher who never laughs and is referred to as "Sour Ball" by Greg and his friends. Greg describes what happened to him last summer with the evil camera, but Mr. Saur believes the story is false and gives Greg an "F" on the assignment. Greg insists his story is true, so Mr. Saur challenges Greg to present the camera. Greg's parents won't let him visit his cousins in the summer if he flunks his report, so he's desperate to prove his story's validity.

Greg then plans to revisit the Coffman House to retrieve the camera. He discusses this over lunch with his friends, Doug, Michael and Shari, who are shocked at his decision and try to discourage him, as the camera had done so many bad things to them last summer. But when Greg's English classmates named Donny and Brian, mock him in public by pretending to take photographs with their hands and quipping "Say cheese and die!", Greg becomes all the more determined to find the camera and prove his story is true.

Later that night, Greg returns to the Coffman House, only to discover that it has been purchased by a new owner who has had the place cleared out. While Greg is searching for the camera in the debris, a boy named Jonathan catches him, taking him for a thief. He soon realizes that this is not the case. Greg learns that Jonathan is the son of the new owner of the Coffman house. Greg finally finds the camera under a raccoon's dead body/corpse, and Jonathan becomes curious as to why he is so interested in it. Greg says that he must show it to his English class, but Jonathan becomes interested in keeping the camera, arguing that it is technically his since it was originally in his new house.

While fighting for the camera, Greg accidentally snaps Jon's picture. The photograph then shows a long carpenter nail going through Jon's foot. Jon thinks that the camera is a joke and Greg asks if he can borrow it for a while. Jonathan then runs off to find his father, only to step on a carpenter nail, as predicted in the photograph, and then is rushed to the hospital after that. The next day, Greg goes to school and is caught by Shari on the way. Greg tries to hide the camera from Shari unsuccessfully. They have an argument about Greg bringing the camera to school which results in Greg accidentally snapping a picture of Shari. The picture then develops and appears to be a negative, leading the two to believe that the camera is broken. Shari then grabs the camera and takes a picture of Greg, which then develops into a picture of Greg appearing to look like an obese person.

Greg then goes to English class, excited to show Mr. Saur his camera as proof for his assignment, only to be disappointed when he discovers that Saur is out for the day, with a substitute in his place. He then decides to put the camera in his locker but is caught by Donny and Brian after exiting the classroom. They torment him with the camera but are stopped by the principal. The next morning, Greg wakes up to find himself fatter in his pajamas. His mother disagrees, saying that his pajamas are always too tight for him. Greg finds out in school that Shari has lost weight. Over the following days, Shari loses more weight while Greg gains more.

Mr. Saur arrives the following day and Greg shows him the camera which he ignores. He then makes his final decision, which is to give Greg a failing mark. Greg's parents insist that his weight gain is the result of some allergic reaction to something he ate. Shari and Greg, desperate for a solution, realize that if they make Greg's photo negative, there might be a chance of returning to their normal bodies. They rush to a photo shop where Greg's brother Terry works. They find him and plead with him to reverse their pictures. Greg offers him all of his allowance, which his brother accepts. His brother then reverses the pictures and the following day, Greg and Shari return to their normal bodies.

Against Shari's advice, Greg brings the camera to school and again insists to Mr. Saur to give him a passing mark for his assignment, offering to demonstrate the camera's powers. Mr. Saur takes the camera and insists on taking a picture of Greg with his entire class. He then snaps photo. He asks Greg what is going to happen and Greg says they'll see. 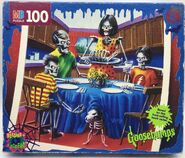 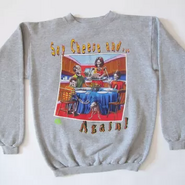 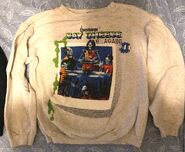 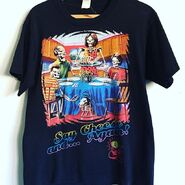 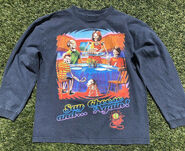 Say Cheese and Die — Again! was adapted into an episode of the Goosebumps TV series. It is the eighteenth episode of season three, and the sixth-second episode overall. 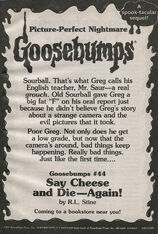 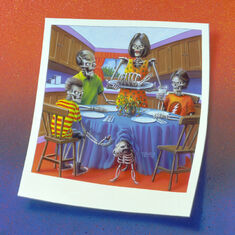 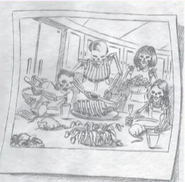 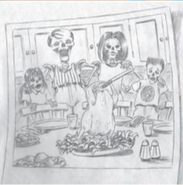 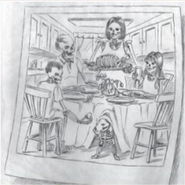 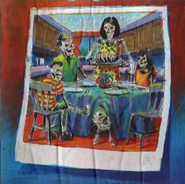