One picture is worth a thousand screams.

The original 1992 cover illustration features a family of skeletons (presumably the Banks family) having a picnic.

The 2009 Classic Goosebumps cover illustration shows the camera on the ground, with the hand of a collapsed body beside it. A human skull's reflection can be seen inside the broken lens.

EVERY PICTURE TELLS A STORY...

Greg thinks there is something wrong with the old camera he and his friends found. The photographs keep turning out wrong. Very wrong. Like the snapshot Greg took of his father's new car that shows it totaled. And then Greg's father is in a nasty wreck. But Greg's friends don't believe him. Shari even makes Greg bring the camera to her birthday party and take her picture. Only Shari's not in the photograph when it develops. Is Shari about to be taken out of the picture permanently? Who is going to take the next fall for... the evil camera?

Four friends, Greg Banks, Shari Walker, Doug Arthur, and Michael Warner, wonder what they should do during a boring fall day in their town, Pitts Landing. After several proposals, the four agree to sneak into the mysterious Coffman House, an old dilapidated building that is said to be haunted. The building is also home to a strange man nicknamed Spidey. While exploring the basement, Greg finds a camera hidden inside a compartment in the wall. Greg is interested in photography, so he picks up the camera. He asks Michael to pose for a picture. Michael stands against a staircase railing. After Greg takes the picture, the camera makes a whirring sound and a photo comes out of the front of the camera. Michael asks to see it and leans against the railing. The railing breaks, and Michael falls to the ground, hurting his ankle.

Spidey enters the basement through the house. Scared, the kids leave through the back exit. Greg takes Michael's photograph and the camera with him. When the group stops running, they inspect Michael's photograph. To everyone's surprise, Michael's picture shows him falling instead of leaning on the railing. Later that day, Greg takes multiple photographs with the camera. First, he takes a photo of his father's new car, but the picture shows the vehicle wrecked. Then, he takes a photo of his older brother, Terry, but the picture shows him on a baseball field in a worried state.

On Tuesday, Greg, Shari, and Michael go to Doug's baseball game. Before it starts, Greg takes a photo. The picture shows his friend lying on the ground with his neck at an unnatural angle. Doug refuses to believe that anything bad could happen to him. He assumes the camera is broken. However, during the game, a baseball hits him, causing him to fall to the ground. His neck bends to an unnatural angle, as the picture predicted. Greg is completely sure that the camera is responsible for these events, but his friends refuse to believe him. It's at this moment that the pictures of Terry and the new car come true; Terry appears on the baseball field in a worried state. Terry tells Greg that their father has just suffered an accident and that the car is completely totaled.

That night, Greg has a nightmare where he takes a photo of his family during a barbecue, but the picture shows them as living skeletons. Shari continues to be skeptical of the alleged camera's "powers" and asks Greg to take it to her birthday. Initially, he refuses, but he eventually takes the camera to the party. During the party, Greg takes a photo of Shari, but the pictures doesn't show her. Soon after, Shari disappears mysteriously without a trace.

After a few days, Greg and Bird begin fighting over the camera. Bird accidentally take's Greg's photograph. The picture shows Greg with Shari being chased by a black shadow. Although he is scared, Greg also feels hopeful because the picture shows Shari. Greg gets an idea: to tear up Shari's picture. When he does this, she reappears, but she doesn't have any memory of where she had been. While the kids talk, Spidey appears. He begins chasing in a scenario similar to what the camera predicted. However, a neighbor sees the case and threatens to call the police. Spidey runs away.

Later, the kids decide that the camera is too dangerous; they resolve to return it to its hiding place in the Coffman House. But, when Greg and Shari they enter the old house, Spidey catches them and reveals the camera's origins. It turns out that Spidey's real name is Dr. Fritz Fredericks, and he is a deranged scientist. His lab partner created the camera, however, Spidey's greed led him to steal the piece of technology and present it as his own invention. What he didn't know was that his partner also was a master of the dark arts. His partner placed a curse on the camera. Now, whenever a photo is taken, something bad will happen to the subject of the photo. Spidey mentions that the camera caused the death of all of the people he ever loved. He spent his whole life trying to hide it. Now that the four kids know the truth, Spidey believes that he must keep them prisoners in his house forever.

Greg and Shari try to escape. During the struggle, Shari takes the camera from Spidey and takes Spidey's photo with it. Spidey dies of fright, an event that the photograph seems to depict. Finally, Greg and Shari return the camera to its hiding place and leave the building. They tell the Pitts Landing police that they found Spidey's corpse in the house.

Joey Ferris and Mickey Ward, two local bullies, had followed Greg and his friends to the Coffman House. The bullies retrieve the camera, and they take their own photo. They wait for their picture to develop.

Some apparel from the 1990s removed the word "Die", having the title instead read "Say Cheese And...". This would be amended for apparel released in the 2000s and beyond.

Say Cheese and Die! was adapted into an episode of the Goosebumps TV series. It is the fifteenth episode of season one. The exclamation mark is omitted from the original title. The episode has since gained notoriety for featuring a young Ryan Gosling as Greg. 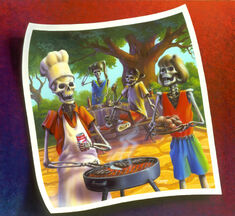 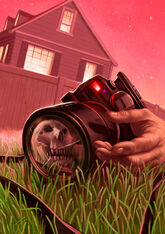 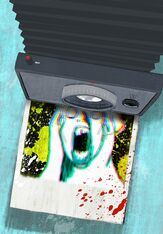 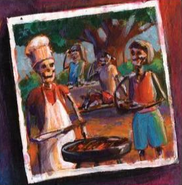 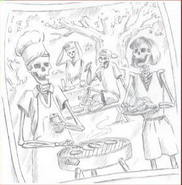