Sarabeth is an evil sorceress and the primary antagonist of the first Monster Blood book, and its accompanying television adaptation. She was the grandmother of Veruca Curry from Horrors of the Witch House.

Sarabeth took the appearance of a black cat and since then had been living with Evan Ross' aunt, Kathryn. Later, it is revealed that she was the cause of Kathryn's deafness and the reason why the Monster Blood is evil. Finally, when she tells Monster Blood to kill Evan and Kathryn. Trigger appears, pushing Sarabeth towards the Monster Blood causing her death.

Sarabeth's appearance on the television episode is similar to her appearance in the book. However, she is a little bit older. Sarabeth's backstory is elaborated on as she used to be Kathryn's roommate but was almost thrown out for practicing witchcraft until she was pushed into her Monster Blood she created and was trapped in there where Kathryn hide it in Sarabeth's room (Now old) hoping no one will find it.

She also appears in archive footage in More Monster Blood, but she does not make a physical appearance.

Several of Sarabeth's pictures appear in Horrors of the Witch House, where it is mentioned that she has long been dead (presumably in keeping with the events of the first Monster Blood book). One of the pictures shown is of Sarabeth as a cat, which is apparently a picture of her in her younger days.

It is also revealed that Sarabeth was survived by a granddaughter named Veruca Curry, who has fond memories of her and also became a witch. However, Veruca showed disgust at what she perceives to have been obsolete practices conducted by her grandmother and was determined to use more sophisticated and modern means to get her way.

Sarabeth as a cat as depicted on the French cover of Monster Blood. 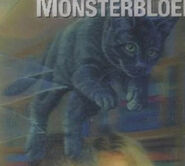 Sarabeth as a cat as depicted on the Dutch cover of Monster Blood.

Sarabeth as depicted on a Topps trading card.

Sarabeth in her cat form as depicted on a Topps trading card.

A picture of Sarabeth in Horrors of the Witch House.