Black
Sabre is a huge monster stated to dwell near the Forbidden Bunk of Camp Nightmoon. It appears as the false main antagonist in the ninth Goosebumps book, Welcome to Camp Nightmare. It is only mentioned in the book but appears in the television adaptation.

When Billy Harlan arrives at Camp Nightmoon, he is told by the camp director, Uncle Al, to stay away from the Forbidden Bunk. Billy follows this rule, but his fellow bunk mates are a lot more curious to find out exactly what's inside. Their counselor, Larry, warns them that if they break Uncle Al's rule they will be eaten by Sabre, who allegedly devours one camper each night. When strange things start to happen and campers start to go missing, Sabre is believed to be responsible. Despite this, Billy never actually encounters Sabre.

The end of the book reveals Billy's entire ordeal to be a test to see if he was prepared for life on another planet. Because of this, it is left unclear if Sabre ever existed at all.

In the TV series, Sabre is featured much more prominently and depicted as a canine-like monster. The creature nearly attacks Billy when he arrives at Camp Nightmoon. The ending of the episode reveals Sabre to be an animatronic controlled by George, one of the camp's employees.

Sabre appears in the video game Goosebumps HorrorTown. It depicts him as a humanoid canine wearing a tanktop and pants.

Very little description is given to Sabre beyond it having red eyes. The episode gives Sabre a more distinct look, depicting it more as a giant wolf-like beast.

Sabre as depicted on the French cover of Welcome to Camp Nightmare. Illustrated by Henri Galeron.

Sabre as depicted on the Dutch cover of Welcome to Camp Nightmare.

Sabre (left) and Sabre being operated by George (right). 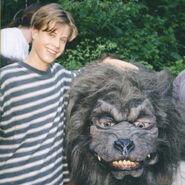 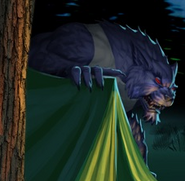