Jordan Prentice
Eugene Lipinski (voice)
Rocky the Dummy is a living ventriloquist dummy that appears as the former secondary antagonist in Night of the Living Dummy III and its accompanying television adaptation.

Rocky was one of the first dummies ever acquired by Trina O'Dell's family after he was found and fixed up by Danny O'Dell since he was falling apart. He did not come to life until the end of the book.

Rocky seems to have a cameo in Escape from HorrorLand. However, it is unknown if the name "Rocky" refers to the same character.

Rocky appears in the adaptation of Night of the Living Dummy III. When Slappy was brought to life by magic words, he decided to also give life to Rocky in order to have someone to do his evil bidding. However, after Trina convinced Rocky that he is part of their family, Rocky then turned on his former master Slappy, and tossed him out the window to be obliterated by lightning. After Slappy was destroyed, Rocky lost the magic that allowed him to have his life-like ability, and went to sleep.

In the television adaption of Bride of the Living Dummy, Rocky's head and a few of his body parts are visible in Jimmy O'James's studio, referred to as "one of Slappy's rivals." This implies that Slappy took revenge on Rocky prior to the events of the episode. 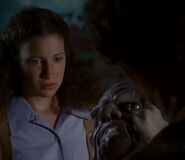 Rocky's remains in "Bride of the Living Dummy".
Community content is available under CC-BY-SA unless otherwise noted.
Advertisement