Goosebumps Wiki
Register
Don't have an account?
Sign In
Advertisement
in: Books, Goosebumps HorrorLand, Night of the Living Dummy Books,
and 18 more

Revenge of the Living Dummy

Revenge of the Living Dummy

The cover illustration depicts Slappy the Dummy in the HorrorLand theme park, sitting on the turnstile in front of the theme park's entrance, gesturing with his arm towards it. Sitting behind him is Madame Doom.

Stare into the Wooden Face of Fear!

Britney Crosby thinks her cousin Ethan is pretty weird--and she happens to be right. Ethan won't stop tormenting Britney with an old ventriloquist's dummy. And the puppet has plans for Britney, too!

Enter a Land of a Thousand Horrors!

Next, someone will be offered a vacation at a popular "scream park." An entire week for free? You'd have to be a real dummy to refuse that! But some guests aren't allowed to escape HorrorLand after just six days and seven frights...

Late one night, Britney Crosby and her best friend, Molly Molloy, are in a graveyard digging a hole. The girls intend to bury an evil item that's been tormenting them. They are interrupted when a hand juts out of a nearby bush and grabs Britney.

The story jumps backward several days. Britney is worried because her troublesome cousin, Ethan, is coming to stay with her. Ethan always torments Britney and Molly. Britney's distaste for Ethan is worsened by the fact that she'll have to give her room to him and sleep in the sewing room. When Ethan arrives, Britney and her mother notice that Ethan is carrying a ventriloquist dummy. Ethan calls the dummy "Mr. Badboy" and addresses it as his best friend. While Ethan is showing Britney Mr. Badboy, the puppet hits Britney on the head. He is scolded for this, but he pleas innocence. Wanting an escape, Britney plans on going to Molly's house, but Britney's mother demands that she take Ethan with her. Molly is disappointed when Ethan comes over, but her dad takes an interest in Ethan's dummy. Mr. Molloy, a globetrotter and collector of rare artifacts, decides to take Ethan and Britney up to his attack so they can see the new relic that he's acquired: a shrunken head, referred to as the Mind Stealer. Mr. Molloy reveals that, according to legend, the head can steal people's minds if it touches them, leaving them completely blank. Even though the head is under glass, Britney is scared by it. As dinnertime approaches, Britney goes back home, taking Ethan with her.

Before dinner, Ethan shows Britney his comedy act with Mr. Badboy. Mr. Badboy begins insulting Britney, but she laughs it off. Ethan says that Mr. Badboy has a mind of his own, but Britney thinks this is ridiculous. Britney remembers that she left one of her favorite posters in her room, and she wants to move it to the sewing room. Ethan tries to stop her, saying that Mr. Badboy will be angered by this action. Britney takes the poster anyways. Later, at dinner, Mr. Badboy is given his own seat at the table near Britney. Mr. Badboy makes rude comments all throughout dinner. Britney thinks Ethan is responsible, but Britney's parents blame her.

The following night, Britney eats dinner at Molly's house. When Britney comes home, she finds that her favorite poster has been destroyed. One of Britney's paintings, an illustration of her deceased pet dog, has also been defaced. Britney is furious, and she goes to Ethan's room. She notices that Ethan isn't in his room. Mr. Badboy suddenly begins talking on his own, and he says that he doesn't like Britney. Britney runs and tells her parents about this incident, but they don't believe her.

Late the following day, Britney gets an unexpected call from Molly. Molly insists that she needs to bury the Mind Stealer. She says that it is too dangerous, and her father isn't around to help her. Britney sneaks out and goes to Molly's house, and the girls take the shrunken head, which is encased in glass, to a cemetery. They begin digging a hole. Britney is startled when a hand juts out of a nearby bush and grabs her. She quickly realizes that the hand belongs to Ethan. The girls finish burying the doll, and the three kids leave.

The next day, Britney's mother forces her to take Ethan to Sunset House, the retirement home where Britney's great aunt lives. At Sunset House, Britney gives a painting lesson to a group of senior citizens. Ethan begins performing with Mr. Badboy for the group. The doll immediately begins insulting the audience. Mr. Badboy throws two cans of Britney's paint on an audience member. Sunset House's director blames Britney for the incident, and she calls Britney's mom. Britney is grounded. That night, Britney sneaks out of her house and runs to Molly's house. The two girls begin searching through Mr. Molloy's archives in the hopes of finding information about Mr. Badboy. Britney finds a folder about ventriloquism, and inside the folder is an old photo of Mr. Badboy. Writing on the back of the photograph reveals that the dummy's real name is Slappy, and he is evil. The writing also cites six ancient words that can supposedly be used to make the dummy come to life and go to sleep.

The two girls go back to Britney's house. Since Ethan isn't around, they are able to sneak into his room and confront Slappy. Britney reads the ancient words that the old document provided her. The dummy slumps forward, and Britney assumes that she has succeeded. Molly finds a strange remote in Ethan's room. Upon pressing one of the buttons, Slappy moves in response. The remote is a controller for the dummy. Britney learns that the dummy wasn't alive, and Ethan had been the one causing trouble.

Britney is awoken in the middle of the night by a tap on her shoulder. Britney is faced with Slappy. Slappy thanks Britney for waking him up, and he addresses her as his slave. Britney then realizes that that the Slappy remote was a dream. Slappy then demands that Britney go back to the cemetery and retrieve the Mind Stealer. Britney refuses to go, and Slappy says that he will go by himself and drain Britney's brain once he retrieves the shrunken head. Slappy leaves, and Britney covertly follows him. While Slappy is digging up the shrunken head, Britney tackles him. Britney's parents drive up to the cemetery, and they say that they've followed her. They say that they will take her to a doctor. In a burst of rage, Britney smashes Slappy's head through the glass encasing that surrounds the shrunken head. Slappy's head taps the doll, and an electric sound rings out. Slappy falls limp. Before leaving with her parents, Britney reburies the shrunken head. As Britney is leaving, she hears Slappy's voice. He promises that he'll be back.

Britney Crosby receives an unprompted invitation to stay at the HorrorLand theme park without charge for a week. Her parents and her best friend, Molly Molloy, are also invited. When the group gets to the park, they learn about the park's staff members, which are green monsters called Horrors. A Horror by the entrance lights their luggage on fire, but Britney's mother assures the group that the event they witnessed was a joke, believing they'd get their luggage back later.

A taxi cab picks up the family and takes them for a wild ride. The taxi stops, and the group gets out. Britney visits an electronic fortune-teller named Madame Doom, but the card Britney receives from it that's supposed to have her fortune is blank. Britney and Molly pass a mask shop, and they see two masks that look unsettlingly like them. The group makes their way to Stagger Inn, the hotel they will be staying at. A Horror meets them outside and warns them that they should leave. The monster hands Brittney a piece of paper and runs away. The piece of paper tells Britney to look for an unspecified "other park."

The group is led inside the hotel by another Horror. Britney and Molly get a room to themselves. The girls don't find their original luggage, but they discover the closets are filled with new clothes for them to wear. They are slightly disappointed that there are no mirrors in the room. The girls go looking for Britney's parents. They find their room, but Britney's parents aren't there. None of the staff is able to help the girls either. The girls go back to their parents' room and find Mr. Crosby's digital camera. On it is a single picture of Slappy. 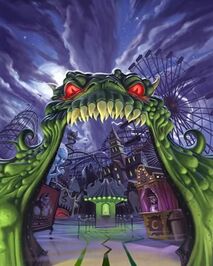