Revenge R Us is the seventh book in the Goosebumps Series 2000 book series. It was published in 1998.

The cover illustration shows a crow holding a newspaper advertisement for "Revenge R Us."

Revenge is a word constantly on Wade Brill's mind. Since the day she was born, her older brother, Micah, has stopped at nothing to make Wade's life as miserable as possible. He embarrasses her in front of her friends. He rummages through her drawers in search of her diary. He even attempts to pull her pants down in front of her crush. However, Wade's parents think Micah is perfect. After all, he gets straight As and is captain of the varsity soccer team. Her mother tells Wade Michah only teases her out of love, but she doubts that highly.

On the day of her friend, Erin's birthday party, Micah is late in picking her up. Tired of waiting, she departs the house to look for him. Since it is raining heavily, Wade's dress soon becomes soaked. Micah eventually pulls up beside her, but his car hits a mud puddle in the process, leaving her clothes ruined. The fuming Wade makes it to the party, where Erin allows her to quickly change. While in the bathroom, an ad in a magazine catches her eye. It's a single address, with the words Revenge R Us beneath it. Wade tears out the ad and pockets it for later.

The following day, Wade heads out with her friend, Carl, to the public pool. To Wade's horror, Micah's voice booms over the loudspeaker. He begins to read snippets from Wade's diary, revealing her crush to everybody. Wade storms off, deciding she's spent too long waiting for payback. She decides to follow the address given on the Revenge R Us ad and drags Carl along with her. Their search leads them to a rundown trailer park across town. Entering Revenge R Us, the two are greeted by a dark-haired woman named Iris and her pet crow, Maggie.  Iris sits them down and Wade begins to explain her situation. She tells Iris she wants Micah to suffer for the torment he's put her through. While Wade is unable to give Iris any money, Iris allows Wade to try out her magic for a "free trial." She instructs Wade to stroke Maggie's back three times and think of a curse to cast on Micah. Wade chooses to give Micah a severe itch that will never go away.

Arriving back home, she waits in anticipation for Micah's itch to start, but nothing seems to happen. In the morning, Wade is horrified to find her body itching all over. She bikes back to Iris' trailer, hoping to get help. Iris says something must have gone wrong with her magic, and is able to successfully stop Wade's itching. However, Wade tells Iris she is owed another chance at revenge, to which Iris reluctantly agrees.

Wade decides to cast a spell that will make Micah's hair fall out while he is on a date. However, this too doesn't go according to plan and Wade begins to grow thick, black hair all over her body. Iris once again reverses the spell. She promises Wade another opportunity for payback and says that this time, Wade's problems will disappear for good.

Iris' promise ends up becoming very literal when Micah vanishes without a trace. Wade begins to feel guilty over her actions and begs Iris to bring Micah back. Iris tells Wade this is only possible if Wade finally pays her properly. She gives Wade a mission: She must sneak into the house of her evil sister, Paula. She tells Wade that Paula took from her another crow by the name of Minnie. Now, Wade must steal the crow back without getting caught.

Wade infiltrates the house and finds Paula asleep in a chair. She successfully locates Minnie, but not before all the noise wakes Paula up. She stands up and casts aside her black wig, revealing Micah underneath. He tells Wade this was all really a part of his revenge plan. He found the ad for Revenge R Us and paid Iris to make sure all the spells against him were reversed. Micah thinks he's finally won, but Wade hatches a final plan for revenge.

She steals Maggie from Iris, and casts a spell that makes Micah do backflips nonstop. She and Carl decide to have more fun with Micah. They turn him into a slug, and later, a frog. This is cut short when a furious Iris shows up at Wade's door. She tells Wade she must be taught a serious lesson for stealing Maggie. She attempts to turn Wade and Carl into frogs, but Wade is able to use Maggie against her.

However, Iris reveals that — if you make four wishes in a day — the fourth spell will be turned on you. Wade is transformed into a frog and begins hopping around next to her brother. She spots a fly clinging onto the wall and decides that eating it is a lot more important than getting revenge.

Italian (Io Sono la Vendetta - I am the Revenge) 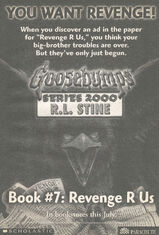 Book advertisement from I Am Your Evil Twin. 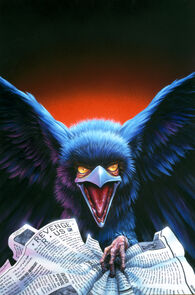 Retrieved from "https://goosebumps.fandom.com/wiki/Revenge_R_Us?oldid=125954"
Community content is available under CC-BY-SA unless otherwise noted.