Goosebumps Wiki
Register
Don't have an account?
Sign In
Advertisement
in: Books, Carnival of Horrors Books, Give Yourself Goosebumps,
and 17 more

The cover illustration depicts a bunch of crazed ghosts riding a long roller coaster that seems to extend far off into the background.

IT'S THE RIDE OF YOUR LIFE...AGAIN!

You escaped the first time. But Big Al, the evil carnival manager, wants your second visit to last forever!

You've got to get out there—before midnight. If you win three midway games, you have a chance. But the games are horrifyingly hard. Like Q Quest. If you pick the wrong number, the penalty will really blow you away!

Maybe you should look for a way out on the rides. But watch out for the Roller Ghoster. It's a steer-yourself roller coaster—filled with ghosts!

A carnival has come to town, and your aunt and uncle decide to take you to it as a surprise. Your cousin, Floyd, accompanies you on the journey, as does Patty, the same girl who appeared in the first Give Yourself Goosebumps book, Escape from the Carnival of Horrors.

Your uncle drives you and your friends to the carnival. He instructs the three of you to walk into the carnival while he and your aunt look for parking. Cautiously, you enter the fairgrounds. You slowly realize that the carnival you've stepped into is the Carnival of Horrors. Once again, you must escape the carnival before midnight, or you will be trapped there forever!

You can choose between trying to blend in with the crowd on the midway or riding some of the carnival's attractions. The plot forks after the reader makes this decision.

If you choose to visit the midway, you must win three carnival games and face off against Big Al in a "final challenge" in order to escape.

If you don't want to be on the midway, you can choose to explore some of the carnival's rides to see if any of them hide an escape.

Norwegian (Tilbake til Skrekkens Tivoli - Back to the Horror Funfair) 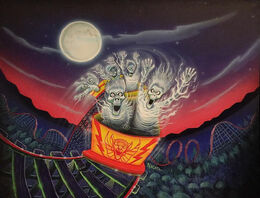 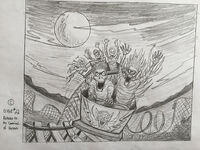