Into the Jaws of Doom

Trapped in the Circus of Fear
Return to Terror Tower is the second of the special editions of Give Yourself Goosebumps, and the second book in the Terror Tower saga. It was published in 1998, and is a sequel to the twenty-seventh Goosebumps book, A Night in Terror Tower.

The cover illustration depicts the Lord High Executioner in a dungeon, holding his ax.

PACK YOUR BAGS AND GET GOING...BACK IN TIME!

Need a vacation? Nothing beats traveling. But now you're stuck time traveling—back to the Middle Ages.

It's no joke. Remember Eddie and Sue from A NIGHT IN TERROR TOWER, Goosebumps #27? Well in this book their story continues—and you're in it! Can you help Eddie and Sue escape from the tower again? You'll have to get past a ferocious dragon and a lot of soldiers with very sharp swords. And you'll have to use your head—or lose it to the evil Executioner.

Return to Terror Tower follows the events of A Night in Terror Tower, with Sue and Eddie being your friends now. They request your help in reclaiming their rightful throne and overthrowing the evil king (their uncle) that is ruling their village, while escaping the capture of the king's knights and being sent to the executioner. The book contains quite a few areas to explore through the use of a crossroad map.

There are twenty-four bad endings and two good endings. 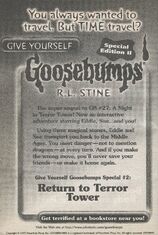 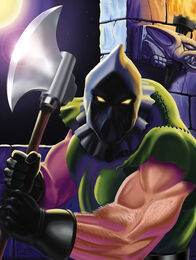 Retrieved from "https://goosebumps.fandom.com/wiki/Return_to_Terror_Tower?oldid=148686"
Community content is available under CC-BY-SA unless otherwise noted.